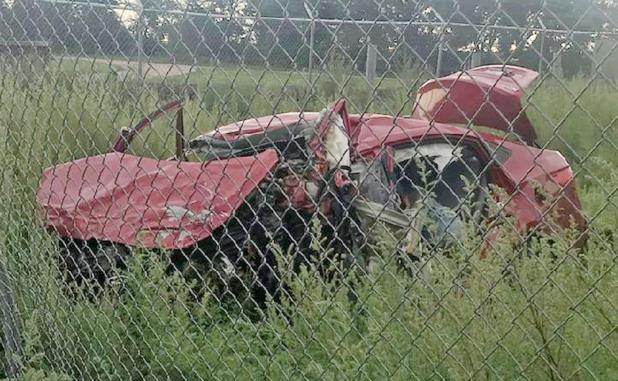 An Illinois man died in August, 2019 while this 2017 Hyundai sedan was being pursued by a Perkins County Sheriff’s Office deputy. A grand jury cleared the officer and the department of any wrongdoing in the man’s death.

Members of a 18-person grand jury cleared the Perkins County Sheriff’s Office of any wrongdoing during an Aug. 9, 2019, high-speed pursuit that resulted in the death of a 55-year-old Illinois man.

Nebraska law requires a grand jury be convened whenever someone dies while being apprehended or in police custody.

After nearly eight hours of testimony, the grand jury determined the Sheriff’s Office and the Grant Volunteer Fire Department acted in accordance with their policies and procedures with no criminal intent.

The incident in question occurred during the night of Aug. 9, 2019.

At 9:44 p.m., a citizen reported a red car driving erratically on Highway 61, and then parking at Golden Ours Convalescent Home.

A Perkins County Sheriff’s Office deputy responded and located the vehicle, a 2017 Hyundai sedan, in the parking lot, where he noticed a headlight was out. The vehicle departed, and the deputy initiated a routine traffic stop at the 1100 block of Central Avenue.

The driver, James P. Lustyk of Roselle, Ill., was asked to step out of the vehicle after telling the deputy he was in possession of marijuana. He then proceeded to flee the scene.

The deputy turned on his emergency equipment and began to pursue Lustyk northbound on Highway 61.

Sheriff Jim Brueggeman said the Lustyk vehicle was traveling in excess of 100 mph with the deputy about one-eight to one-quarter of a mile behind.

About three miles north of Grant, the vehicle veered off the west side of the highway and into the ditch before striking a large tree stump.

The vehicle flipped, coming to rest on the passenger side in the driveway of the rural residence at 76260 Hwy 61 known as the Stumpf place.

The deputy immediately summoned emergency responders and evaluated the victim upon arrival, finding no signs of life.

An investigation of the incident was conducted by special investigators with the Attorney General’s Office and the Nebraska State Patrol.

The information from this investigation was the basis for prosecutors from the AG’s office and county attorney’s office in questioning the seven different witnesses.

A total of 248 exhibits were received and reviewed. Some of these included the accident report, autopsy and toxicology reports, photographs, training and policy manuals, and body camera video.

After reviewing the evidence, the grand jury determined Lustyk’s death was caused by blunt force trauma when his vehicle struck the stump.

Finding no reason for criminal indictment, the grand jury returned a “No True Bill.”

A No True Bill is defined as a finding by a grand jury that there is no probable cause to decide that a crime has been committed and that evidence found was insufficient to indict or put the accused person on the trial.

The grand jury also made two recommendations as part of their inquiry.

The first was that Perkins County commissioners allocate the funds necessary to re-establish the county’s communication/dispatch center at the Sheriff’s Office.

The second was to ensure the Sheriff’s Office’s body and cruiser cameras remain in proper working order at all times, even if a different provider is needed to do so.

Brueggeman said the deputy’s rear cruiser camera and body camera were operating at the time of the pursuit but that the front vehicle camera was not.

Apparently, grand jurors felt that video would have been helpful in their deliberations.

Brueggeman said this week the front camera has been repaired and is fully operational.

Brueggeman visited with county commissioners at length about the recommendations during their Feb. 5 meeting.