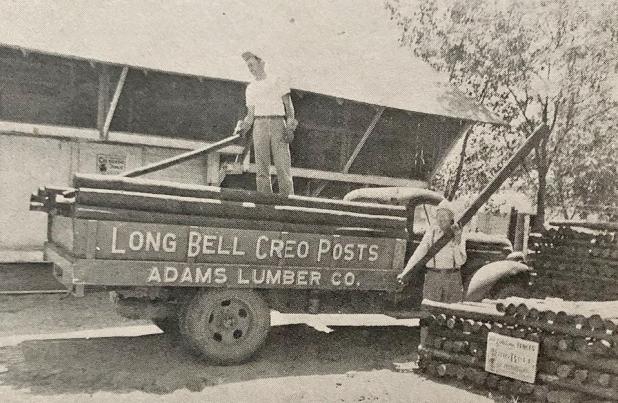 Gerald Kent and W.H. “Bill” Adams prepare a load of poles at Adams Lumber in Grant.

With locations in Grant and Imperial, owners Chad and Amy Leibbrant are planning a weekend celebration in both locations to commemorate the occasion.

Four $100 gift cards will be given away at each location. Customers can come enjoy smoked pork, beef and beans and the kids can enjoy the bounce house.

According to Tribune archives, W.H. “Bill” Adams started in the lumber business in Hastings in 1903. He established Adams Lumber Company on June 5, 1919 with the purchase of Arterburn Lumber Company in Grant from Ro Arterburn, and also started a yard in Venango.

“When I came here in 1919, there were always a good lot of wagons, cars and people on main street. It’s a good clean town, a good place to raise a family. With our churches, I think it’s a better than average moral town,” stated 90-year-old Adams in a 1972 Tribune article.

Adams Lumber Company sold the Venango yard to Briggs Lumber Company of Suther-land in April 1921 and purchased the Madrid and Grainton lumber yards in June 1922 from B. F. Hastings.

In late August of 1924, A.C. “Andy” Adams moved from Kansas to take over the manage-ment of the Madrid location. The Madrid Herald stated he was “a very pleas-ant and agreeable young man.”

Andy managed the site until March 1953, when he purchased a lumber yard in Haxtun, Colo. The Grainton

location was closed around this time, and the building was moved to Grant where it’s still used today for storage.

After serving four years with the U.S. Marines, Gerald Kent, husband of Bill’s daughter Theone, began his tenure with Adams Lumber in February 1946. The Tribune quoted him as “a talented young man, having gone through our public schools with honors, and is well liked and respected in the community.”

Ready-mix concrete was added to the business’ offerings in 1958 with a new office building added in 1962.

The company became the only lumber yard in Grant in 1966 with the purchase of Collier Lumber Company, which had been in operation since 1890, as well as the Grant Cooperative Exchange’s lumber and hardware in-ventories.

Gerald and Theone became the owners of Adams Lumber after Bill passed away on April 21, 1975 at the age of 92.

“For the last few years of his life, Bill was in a wheelchair and lived at the nursing home. But every day, Theone would pick him up during the day and take him to the office. People at the nursing home used to kid him about being the only resident there with a full-time job,” said Gerald in a 1984 Tribune article.

The third generation in the business began in 1975 with the addition of Mike Frerichs of Grant, husband of Gerald’s daughter Marcia. Gerald’s son, Ron Kent, joined shortly after in 1976.

This generation maintained operations with Gerald’s semi-retirement in 1986.

“I wouldn’t have traded this business and life for any-thing. The opportunity to work with all the fine people of this area was reward enough,” stated Gerald in the Tribune archives. He passed away May 21, 1999 at the age of 77.

The Madrid location was sold to Tom Anderson in early 2012, who renamed the business Anderson Lumber.

Leibbrandts purchased the Grant and Imperial locations in August 2012, keeping the historical name. Chad said they continue to work hard every day to uphold the outstanding customer service and reputation Adams has always been known for.

Ron retired at the time of the sale, staying on to help Leibbrants with the transition.

Marcia retired in December 2016, and Mike still manages the Imperial location, with plans to retire this fall.

Ben Fowler will take over as manager in Imperial, and Jeff Behrends manages the Grant location.

While Adams Lumber may not have been the area’s first lumber business, its rich history and longevity far surpasses any other.