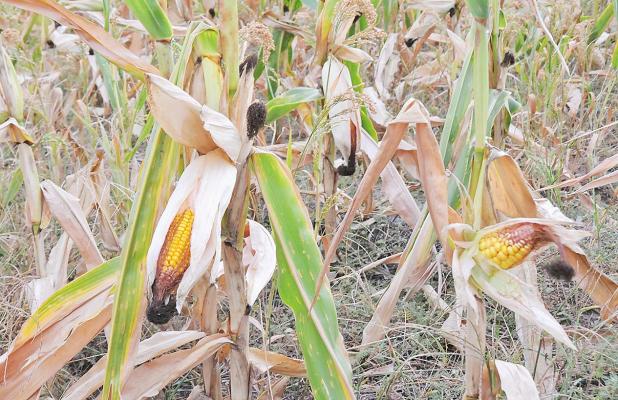 This year’s dryland row crops have been hit hard by the hot summer temperatures and little rain in July or August. The effect can be seen in the varying sizes of ears that developed this summer in this field south of Grant.

Heat, lack of rain too much for dryland crops

Farmers who plant dryland corn and soybeans know it can be a crap shoot, totally dependent on the weather.

In craps, when a person rolls a pair of ones, referred to as “snake eyes” they lose their bet but they get to keep rolling the dice.

For the most part this year, the dryland corn and soybeans has come up snake eyes.

A dryland row crop depends on many things—but primarily, no hail and plenty of rain.

While the county didn’t get hit with any widespread hail storms, the rains came far and few in between. It proves Mother Nature is still in control of that gamble called farming.

Over the past several years, plenty of rain has fallen in the region, making dryland corn a profitable venture. Not true this year.

For the whole year, the station has recorded just 6.276 inches of precip.

One farmer about eight miles northeast of Grant said rains went around his farm all summer, dropping less than two inches.

In July and August, when the dryland needs rain the most to finish out a good crop, there was only 1.488 inches at the station in July and a meager 0.362 inches in August.

Conversely, a URNRD station five miles south of Grant has recorded 9.97 inches of precip this year, with 3.6 inches in July and 1.1 inches in August.

Another station southeast of Madrid has recorded 8.6 inches for the year, with 3.87 inches in July but just 0.22 in August.

Stations either side of Venango show a range of 6.8 to 7.1 inches this year. August was dry there as well.

At the National Weather Service’s observation station in Imperial, the average temperature for August was 93°F.