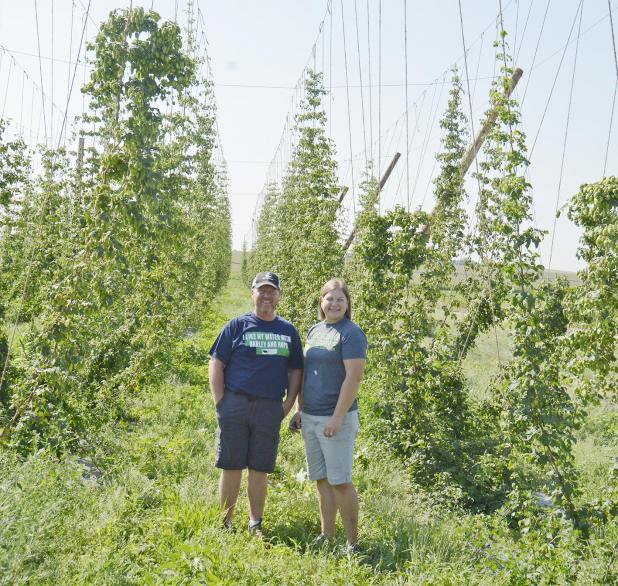 Chris and Holly Cornelius of rural Madrid stand in their one-acre hop yard that was planted spring 2017. While the crop takes three years to reach full maturity, it will produce a small harvest this September. 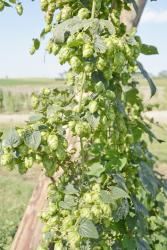 When Chris and Holly Cornelius of rural Madrid started building the structure for their one-acre hop yard last year, there was wide speculation of what they were up to.

From hunting projects, a bird sanctuary to even jokes of a giraffe sanctuary, the roughly 20, 20-foot poles needed to grow hops caught the eyes of many.

As people who enjoy the culture of craft beer, Chris began brewing his own beer a couple years ago. However, his interest in hops came before that.

“People assume the two interests are very closely related, but they’re really not,” he said.

The couple discovered 90 percent of U.S. hops are grown in Washington, Oregon and Idaho, which have similar climates to Nebraska.

They decided to explore that.

Nebraska currently has 40 acres of hops, up 15 acres from last year.

“There’s been a huge interest among Nebraska farmers to look at hops as a possible additional economic interest for the state,” said Holly.

Holly explained hops are a perennial plant that grow on bines. Unlike vines that use tendrils and other means to climb, bines climb with the help of short, stiff hairs along the stems.

The bines produce cones, which when harvested are used as one of the four primary ingredients in beer; the other three being water, malt and yeast.

There are about 80 different varieties of hops, at least a dozen of which are proprietary. Proprietary hops are developed and owned by private companies, making it illegal for others to grow them.

Chris said there are two primary reasons for putting hops in beer.

Secondly, depending on the variety, they provide bitterness, aroma and flavor while also acting as a preservative.

While hops are primarily used in producing beer, Holly said they can also be used in some herbal remedies.

Chris and Holly, along with family and friends, planted 1,200 hops by hand last spring. The labor-intensive crop consists of four varieties, which will take about three years to reach full maturity. They plan to have a very small harvest come September.

The bines had to be hand-trained to grow up the coconut fibers, which extend from 20-foot telephone poles. Harvesting by hand is very tedious, with each bine taking about one hour.

The most common question the couple is asked? “You’re building a hop yard. Are you going to start making beer?”

Well, one pound of hops averages one barrel of beer, or 31.5 gallons. One acre averages 2,000 pounds of hops.

“That’s quite a bit of beer,” said Chris.

One pound of hops brings an average of $10. As far as selling their harvest, Chris said they’re still at the stage where they’re determining if it’s a viable crop to grow in this area.

While they feel good about it at this point, he said they probably won’t be able to establish that until next fall.

At that point, they will decide how to move forward. A full harvest would require them to invest in expensive equipment. For now, they are looking forward to manually harvesting enough for themselves and anyone else interested.