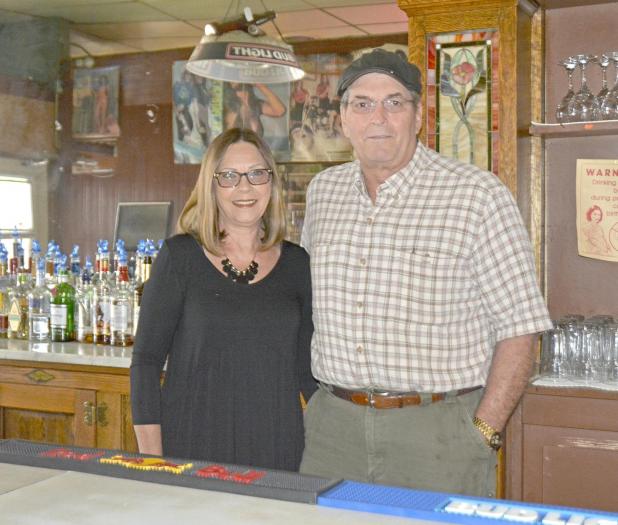 Darlene and John Potts stand in the bar they have successfully owned and operated for the past 25 years.

This month marks 25 years of DJ’s Bar & Grill for the community and for owners John and Darlene Potts.

Over two decades ago, the bar went up for sale and John and Darlene jumped on the opportunity, becoming the owners in September of 1993.

They didn’t imagine they’d still be running the place all these years later, but wouldn’t change a thing, and have made some lasting memories along the way.

“It’s sure been good to us,” John said of the establishment.

Bill DeLancey owned the bar for about 45 years prior to Potts’ purchasing the building, and at that time, only served a few menu items and beer.

“They only served beer, so we made the transition into mixed drinks, and added to the menu as well,” Darlene said.

There are a few items on the menu today that stuck from DeLancey’s menu, the favorite being “the shorty,” which is a burger made up of two hamburger patties.

Upon purchasing, Potts’ did a weekend remodel. Though it was doubted by the community they would be able to complete the work in three days time, John proudly states they did it, and come that Monday, they were ready and open for business.

“Oh and there was only one bathroom in here when we bought it,” Darlene said, and explained at the time, women really weren’t part of their costumer base.

“It was a man’s bar,” Darlene said, and John added, “It took us a good couple years to really change that and start bringing in some women.”

Though they did put a lot of work into the renovation process, there are still bits and pieces of the former bar in place today.

The bar stools and the wooden foot rest are the original, the old mirrored bar (which was painted at the time of purchase, and has since been stripped and restored to its original wood finish,) and even a couple of the tables, which are noticeably faded.

John pointed out the faded sections on the table are from the days when DJ’s was the gathering place to play cards, and the way the table finish is worn is proof of the many games played there.

The Potts agree there have sure been a lot of changes, price inflation being the biggest change of all, according to Darlene, and “lots of Long hours,” she said of the biggest challenge they’ve faced in the 25 years of ownership.

Though every business has their ups and downs, Darlene recalled fondly the first time they ever did karaoke, and how packed the place was, “It was good, but overwhelming,” she said.

Now married for 32 years, with four grown children who have given them 13 grandchildren, John and Darlene are looking ahead and know that the time is coming for them to hang their hats and move on to the next chapter in their lives.

They are looking to sell the bar and retire within the next couple years. “We’re really down to the two-year plan now I think,” Darlene laughed.