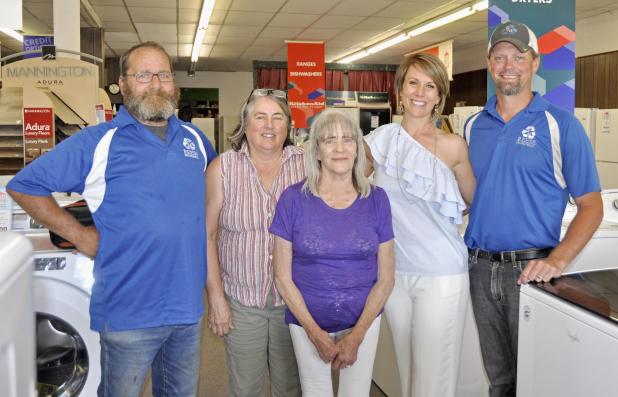 Sullivan’s Appliance & Air owner Martha Stoermer is pictured in center Monday evening after closing on the sale of the local business to Adair and Jason Reese, pictured at right, who will be changing the store name to Reese Mechanical Inc. Pictured at left are employees Marshall and Tina Thompson.

Jason and Adair Reese closed on the sale of Sullivan’s Appliance & Air in Holyoke, Colorado on June 10.

Sold by Martha Stoermer, her husband, Jim Leibbrandt, became a partner in the business in 1999 and became sole owner three years ago.

Leibbrandt’s sudden death Feb. 8 pushed business decisions to the forefront for his wife. Stoermer is proud of the business her husband built in the last 20 years.

“It has been a passion of ours to make sure to keep sustainability of communities,” said Adair after the Monday closing.

She and Jason noted that Holyoke seems like a nice community and is a good fit for them for expanding their business. They have heard good things about Holyoke.

“We’re excited to embrace the past success [of Sullivan’s Appliance & Air] and be able to grow,” Adair added.

Reese Mechanical will continue to carry current appliance brands and will provide service for all brands of heating and air conditioning.

Jason noted that they carry GE appliances in Grant and hope to transition that brand in Holyoke, as well.

Marshall and Tina Thompson have been offered the opportunity to remain on staff at Reese Mechanical. Jason said they will also be looking to hire someone in town.

While the Reeses won’t reside in Holyoke, they fully intend to be part of the community. “We’ll still be involved in community events,” Adair said.

Both Jason and Adair plan to have a presence in Holyoke each week. They are very community minded and like the hometown feeling.

Jason is a 1999 graduate of Perkins County High School in Grant, and the couple started Reese Mechanical as a heating and air conditioning service business in Grant in March of 2010.

They opened their appliance store in 2013. When they ran out of room in their small location, they moved to their main street address at 220 Central Ave. in Grant in 2014.

The Reeses are active in the Grant community and have two children: Ava, 13, and Alec, 11.

Jeff and Olga Sullivan opened Sullivan’s Appliance & Air in Holyoke Sept. 27, 1994. Dave Williamson became a partner in 1996, and the Sullivans left in 1997.

Leibbrandt joined Williamson as a partner in 1999 and then became the sole owner in 2016 when Williamson retired.