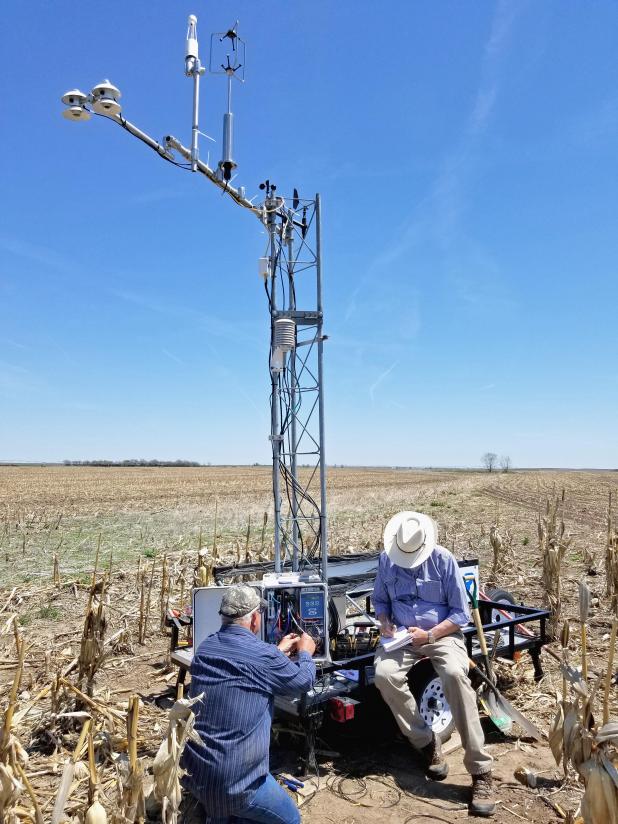 Dayle McDermitt (right) with UNL’s Water for Food Institute gets an Eddy Covariance System in Perkins County up with the help of Dwain Curtis, who works for the URNRD.

New water-usage tools for irrigators in the Upper Republican NRD will be improved under a joint project with the University of Nebraska-Lincoln.

The URNRD and UNL have erected an Eddy Covariance (EC) System in Perkins County.

The EC tower measures the movement and speed of eddies, or three-dimensional circular patterns. By measuring the speed of the eddies, the movement of water vapor and other gasses, such as carbon dioxide, can be determined.

The variance between the movement of air and the composition of the air helps determine evapotranspiration (ET).

This measurement method and the equipment being used in Perkins County are considered among the most accurate means available of determining ET.

The information will be used to calibrate three weather stations owned and operated by the URNRD, one each in Dundy, Chase and Perkins Counties. The weather stations currently provide all normal weather-related data in addition to providing ET estimates.

Those estimates are expected to be significantly improved after this irrigation season once they can be calibrated using information from the EC system in Perkins County.

Additionally, the EC system will be used to help “ground-truth” ET estimates based on satellite and aircraft remote sensing devices. In addition to providing the most accurate ET estimates possible from previous time periods, a primary goal of the URNRD is to provide forward-looking ET estimates to help irrigators plan when and how much to irrigate.

UNL is working on a website that may help provide this information.

While that project is under development, the URNRD also has precipitation data from 13 sites throughout the district available on the website, along with three weather stations located west of Imperial, north of Grant and south of Enders.

On each of these sites, precipitation data is available by year, month, week, day and hour at urnrd.org.