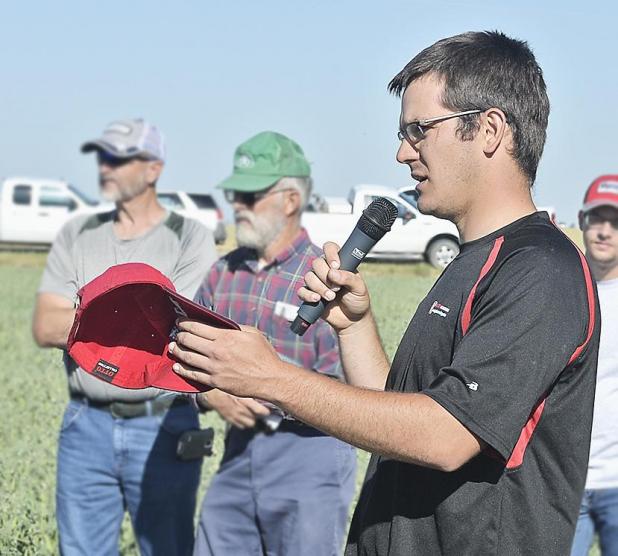 Strahinja Stepanovic has been conducting research on wheat and peas at the Henry J. Stumpf International Wheat Center east of Grant since 2014.

Wheat harvest is finally in full swing for area farmers.

For the staff at the Henry J. Stumpf International Wheat Center just east of Grant, wheat harvest takes on a little different perspective.

Like their farmer counterparts, it’s payoff time, but for the wheat center, that payoff comes in the form of valuable research results.

For wheat center Extension Educator Strahinja Stepanovic,  the data obtained with this year’s harvest will be key in helping fulfill the mission of the wheat research center.

While actively involved in wheat research, he has also been at the forefront of conducting research on two pulse crops—field peas and chickpeas.

His research is looking at the crops as a replacement for fallow tilling in a corn-wheat-summer fallow rotation.

He was joined by other researchers and industry specialists for the center’s summer field day in mid-June.

Yield results from test plots for wheat, pea and chickpea varieties were presented, along with the cropping practices used on the plots.

This year, data will be gathered on 49 different winter wheat varieties and the various cropping practices used.

In addition, the center provides plots to University of Nebraska wheat breeders and commercial seed companies to conduct experimental and trait development research.

Stepanovic said the research by these entities represents the pipeline for new varieties. They select desirable traits to breed into future varieties of seed.

Stepanovic said their research on pulse crops last year looked not only at yield potential but water use. Those same studies are underway again this year.

Last year, field peas showed the most efficient water use, yielding 30 bushels per acre with just 11.9 inches of moisture.

He said they are also researching the feasibility and value of irrigation on field peas and chickpeas. Three different levels of irrigation will be applied.

Stepanovic said this could be one of the best years ever for field pea production.

While some of the pea germination was affected by cold ground temperatures this spring, perfect weather for the flowering season offset that, he said.

He said the plots have lots of pods and said there’s yield potential of 70 bushels/acre.

The irrigation studies are targeted at providing farmers an alternative crop if their fifth-year allocation is not enough for a corn crop.

He said four to five inches of irrigation, along with normal precipitation, will grow a crop of field peas.

Plus, the irrigation can be used during the flowering period to keep the stand cool if air temperatures get into the 80s or 90s.

One year left at the center

Stepanovic and his wife, Ana, are natives of Serbia and are in the U.S. on a six-year work visa.

He has just one year left on his visa and will continue his research until it ends.

Ana, an ag economist with her master’s from UNL, has not been working during their tenure here.

With Stahinja’s work visa nearing an end, she will resume her career with the Kansas Farm Management Agency in Colby, Kansas.

The family is moving to Colby and Strahinja will continue to work in Grant. Once his visa expires, he is no longer employable in the U.S.

Under her work visa, Ana can now work in the U.S. for six years.

The Stepanovics have three daughters, ages 6, 4 and 2.