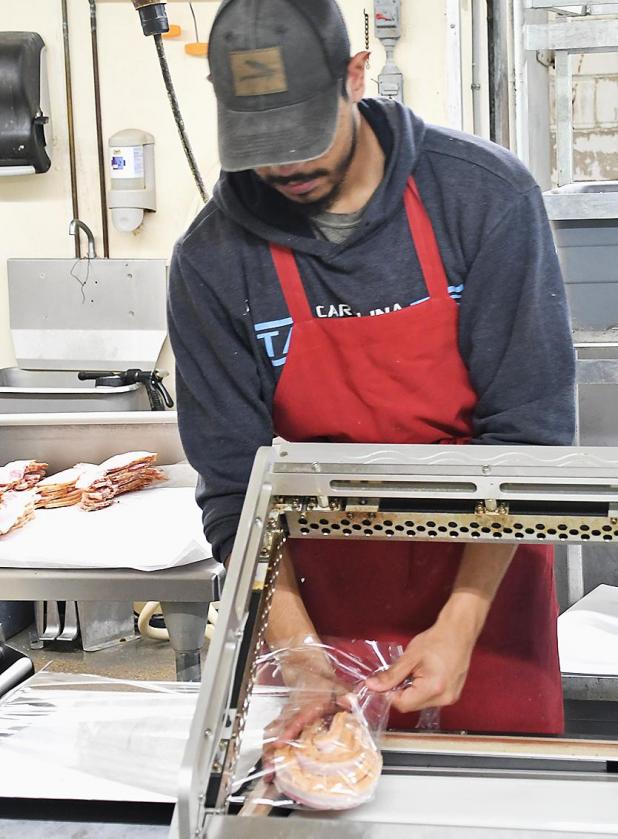 Marcos Moreno, an employee at Grant Packing, packages up bacon for customers.

Perkins County is fortunate that the local beef industry is able to continue running as smoothly as possible during the COVID-19 pandemic.

Grant Packing, Tjaden Ranch and Ogallala Natural Beef are all able to continue their business as usual for the most part, and each business saw an increase in orders.

While many of the large processing plants are closing due to the effects of the pandemic, Grant Packing is booked through January.

Justin Coats  of Grant Packing said the effects of the pandemic are two-fold. On one hand, the catering side of their business has taken a hit due to the lack of large events to cater. The custom butchering side of business, on the other hand, has been incredibly busy.

Because the big packing plants have had to shut down or cut back, it has caused a hitch in the system which has created what Coats  describes as an artificial shortage.

“The beef is in the feed lot, it just can’t get processed until those big packers get running at full capacity again,” Coats  explained. “They can’t rely on small packing plants like this to pick it up.”

The “Big Four” packing plants, which are Tyson, Cargill, JBS and National Beef, take on about 80% of the processing load, while small packing plants like Grant Packing handle the other 20%. With large plants shut down, smaller plants have had to pick up the slack creating a backlog.

The community has overall done well at not over-buying meat products, which would both add strain to the system and raise costs at the store. Purchasing more meat than one’s family reasonably needs could lead to another situation similar to toilet paper shortages that began in March.

Scott Hanson of Ogallala Natural Beef noted an increase in purchases, saying people normally only buy about half of what they’ve been purchasing, but for the most part people are shopping responsibly.

During a “normal” year, they’d just now be reaching their busy season. Instead, their busy season started about eight weeks early due to concerns about COVID-19. He’s filling 50% more calls than usual.

The processors, Hanson said, are booked out until next year. Thankfully, Ogallala Natural Beef’s processor let Hanson know when they began to fill up quickly, so he was able to book plenty of dates, though not as many as he would have preferred.

One downside Hanson noted, though, was how their specialty items will be delayed due to processors focusing on frozen product before taking care of specialty items. There is especially a focus on getting beef products out.

Nicole Tjaden, who owns Tjaden Ranch with her husband Casey, said the community has been prepared and proactive, rather than over-buying, and they are grateful for the support.