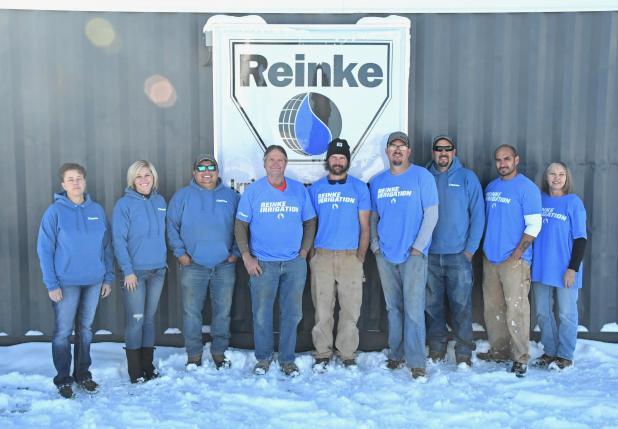 After being approached by Reinke, Ashleigh and Jason Noyes decided it would be the perfect time for a face lift for their business. They have recently remodeled their office space and have even more plans for the future. Noyes Irrigation’s crew includes (l-r) Nikki Toner, Ashleigh Noyes, Jason Noyes, Dick Noyes, Drew Maier, Steve Baker, Tony Morales, Carlos Trejos and Star Kemling.

Noyes Irrigation is undergoing changes to the office, both in appearance and what they offer customers.

Jason and Ashleigh Noyes, who have owned Noyes Irrigation since 2007, have been working on renovations to their property over the last six weeks. Though they have completed quite a bit of work, there are still some changes coming to the office.

The house the offices are located in has a lot of history, according to Ashleigh. She said they have customers who will come in and talk about families they knew who used to live in the home, and memories they have there.

For this reason, Ashleigh said they wanted to save the home and restore it.

“We’ve been in the mix of trying to decide if we were going to build on to our shop and build new offices, or if we were going to try to utilize the location we are at,” she noted. “We decided to hang on to it and restore it to this sound structure and use it like it was.”

They have put on new siding and a new roof, and gutted the inside to build a whole new storefront and office space. For example, there is a new parts area with a larger variety of products for customers to purchase.

They have also added overflow parts storage outside, and plan to put in a pivot display span out front along the highway once they get the concrete pads necessary.

Eventually, they want to renovate the basement into meeting and office space.

The Noyes’ also purchased some land south of their current property which they will utilize as a used pivot lot, along with a space where customers can view ready-to-move homes available for purchase from their other business, Noyes Quality Homes.

About three months ago, Jason estimates, Reinke approached Noyes Irrigation and said they were looking to expand their dealerships. He said Reinke noticed they had a lot of marketshare in the area, so they were interested in working with the business.

Jason said they weighed the options between their old dealer Pierce and Reinke, and one thing factor that helped them decide was Reinke being a Nebraska-based company.

He also noted how Reinke has a lot of history in the production of some of the first pivots.

Founder Richard Reinke grew up working in agriculture in Nebraska, and through his passion he developed technology which is used around the world today.

Pierce, on the other hand, is not a Nebraska-based business. The business was originally based out of Oregon before moving to Texas.

After spending time weighing the pros and cons of each dealer, Noyes decided Reinke was the right way to go.

Jason believes Reinke is a reputable company that will have their backs as a Nebraska-based company as well as a large name brand.

“We are excited about all the changes,” Jason said. “We’ve already got our first few pivots sold, and we have a pretty good deal on brand new pivots being a new dealer.”

He added they have been able to hire new employees because of the changes to the business, and there is even potential for more employee growth in the near future.

They even hope to be able to bring in new employees from outside Grant, which could benefit the community by bringing in new families.

“We’ve been proud to have started as a little dealership in a garage and slowly build every year, and we thank all the customers strongly for that,” Jason said. “We owe a huge deal of gratitude to our customer base for that continued support. We plan on investing into the community and continuing to strive for growth.