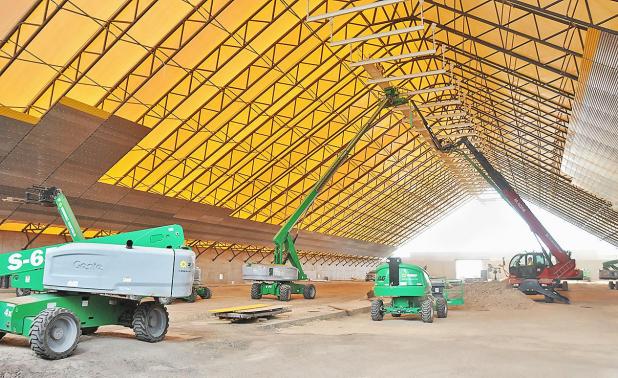 Construction crews were busy last week installing the framework for the overhead conveyor and catwalk that extends the length of the two-million bushel structure. 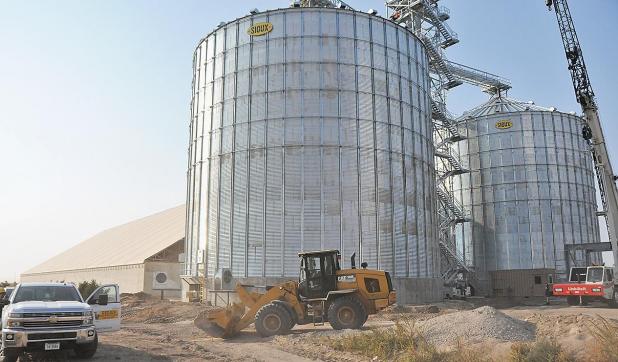 The project includes two 330,000 bushel bins that will allow the company to take in soybeans at the facility.

Since June, the Scoular grain receiving and storage site nine miles north of Grant has been a beehive of activity, especially in the last several months.

The company’s expansion project moves closer to completion each day.

That will bring enclosed storage to nearly seven million bushels.

Not only has the site been busy with construction activity, but farmers are bringing in this year’s harvest of corn and soybeans.

Scoular applied for a conditional use permit from the county in early April. Following public hearings with the county planning commission and with county commissioners May 18, commissioners approved the permit 3-0.

Dirt work on the new site began shortly thereafter, which included enlarging the drainage pond on the site.

Scoular General Manager Rick Matousek said the bin complex should be ready to dump grain into by the end of this week.

He’s hopeful the flat storage facility will be ready for grain by the end of next week. That should be good timing, he said, because they’re going to need the space, based on the amount of grain taken in so far.

Initially, Matousek said the plan was to store soybeans in the bins this year. However, the beans started coming in sooner this year.

As a result, they stored them in one section of their existing flat storage, separating the beans and corn with a wall.

The bins will be used for corn this year, he noted.

Last, the company was hauling grain from the site during harvest to create storage room for the corn coming in.

The company also has an area for ground storage, if the size of this year’s harvest demands it.