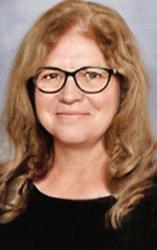 At the conclusion of the school improvement visit Feb. 24, Superintendent Phillip Picquet announced that Nancy Sorensen of Grand Island accepted the offer to join PCS.

Interviews were conducted Feb. 22 with participation by parents, community members, board members and administration.

Sorensen was chosen from a field of three finalists for the position.

Her roots as a long-time elementary teacher have prepared her for her new role.

She completed her degree work for her principalship through Wayne State College in August 2019 and this will be her first position as a principal.

She and her husband Mike are no strangers to western Nebraska. She is a native of Alliance and obtained her teaching degree at Chadron State College.

It was there that she met Mike, who is also teacher and administrator.

The opening at PCS drew special interest because their daughter Bethany and son-in-law Alex Malmkar live in Grant. In fact, Piquet said all three finalist had ties to the local area in one way or another.

Bethany is also an elementary teacher and did her student teaching at PC Elementary. Following that, she taught at Wallace.

She has put her teaching career on hold to raise her family. She and Alex have two daughters.

Sorensen did the same, taking about eight years away from teaching to raise Bethany and her brother, Isaac, who recently graduated from UNL.

She and Mike moved to Grand Island after a nine-year stint at Chase County Schools in Imperial. Nancy taught there for eight years in kindergarten, second grade and fourth grade.

She is currently an elementary teacher at Dodge Elementary, where she has taught fourth grade and first grade.

Mike is the activities director at Grand Island Northwest. He served as high school principal at Chase County.

She said they discussed the Perkins County position a great deal since Mike will remain at Northwest. They decided this opportunity for Nancy was the right one, and it brings her closer to their grandkids.

Over the course of their careers, other schools she has taught at include Hemingford, Big Piney, Wyoming, Alliance, Ansley, Leigh and Columbus Christian.

Her contract will be officially ratified by the board at next week’s regular meeting and take effect on Aug. 1.