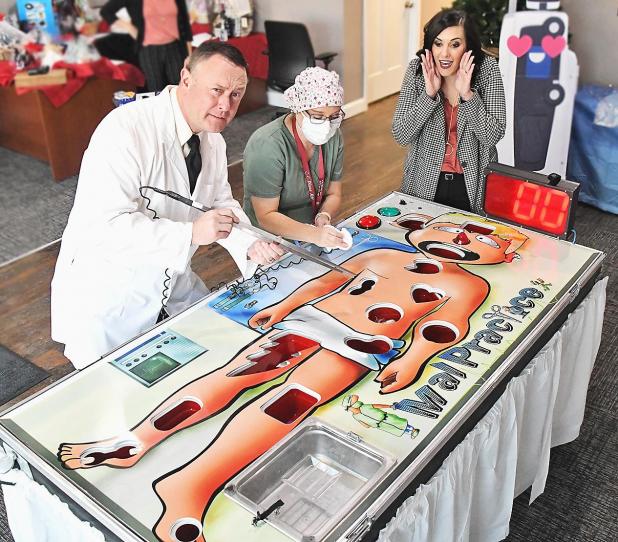 Dr. Shane Banks, surgeon at Perkins County Community Hospital, finds himself in an unusual surgical setting Monday as he gets ready to make an extraction on a unique patient, with assistance from surgical nurse Diane Zwickl and oversight from Ellie McCormick of Arnold Insurance.  The oversized board game is part of the PCHS foundation’s fundraising efforts this year.

Normally, the foundation holds an annual “gala” event late in the year that includes dinner, dancing, silent auction and other activities to raise money for the foundation.

Looking way ahead, Urdahl had no idea in March whether or not the COVID-19 scare would still be around and cancel yet another event in the community.
As it’s turned out, a new resurgance in COVID would have likely affected the event.

Fortunately, Urdahl’s background in marketing helped spur a new event based on a classic board game that’s been around since the mid-60s—Operation.

The goal of the foundation this year is to raise money for a variety of new operating room equipment in the surgery suites at the hospital.

She found a company in Denver that offers a life-size variation on the Operation game so what better way to promote the operating room equipment than to have an “Operation Tournament.”

The response to the tournament far exceeded her expectations, she said. The tournament filled up quickly with 32 two-person teams.

Two teams, both decked out in a mask, gloves and gown, compete against each other in a best-of-three, timed competition.

The scores are based on how many “ailments” each team can remove without tripping the buzzer more than twice. The event is being hosted by Arnold Insurance, with elimination rounds through Dec. 2. Due to directed health measures, the elimination rounds are not open to the public.

The current plan calls for moving the semi-finals and finals to the fairgrounds dance hall Saturday, Dec. 5.

As of now, the public is being invited to come and watch, as well as bid on silent auction items.

“There will be plenty of room to spread out and, of course, because it is an operating room atmosphere, you will need to wear your masks,” she said.

People can also see and bid on auction items at www.32auctions.com/OperationTournament2020.

People not in the tournament can still get involved in the fun.

The game will be available for the public to play for $1/game from 3-5 p.m. through this Friday night and again on Nov. 30, Dec. 1-2 and at Arnold Insurance, 306 Central Avenue, Grant.

Urdhal couldn’t say enough about how people in Perkins County and outlying areas have stepped forward to support the hospital. “It’s been fantastic,” she said.

As of the start of the tournament Monday, more than $30,000 has been raised towards the new equipment.

Team registration fees and silent auction sales will add to that figure, she noted.