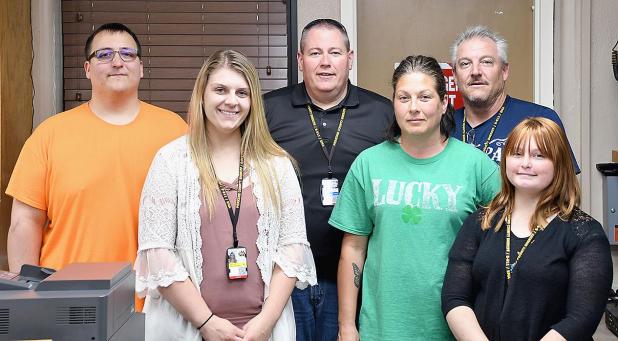 New dispatchers for the Sheriff’s Office’s new communication center are finishing up their last week of training in preparation for the center’s opening on July 1. Dispatchers are (from l-r) Ryan Stark, Kayla Brueggeman, Sheriff James Brueggeman, Jennifer Ketteler, Brian Pankonin and Crystal Jones.

911 Center ready to open on schedule

Perkins County’s communication center at the Sheriff’s Office will begin accepting 911 calls at 12 a.m. on July 1, with Sheriff James Brueggeman acting as the first dispatcher with the new center.

Training for dispatchers was originally set to begin April 1, but due to COVID-19, the start date was moved to May 4. Dispatchers will continue training through June 30, ending just before the center is open for callers.

Recently, Sheriff Brueggeman says, they have spent a considerable amount of time going over call guide cards for both law enforcement and fire.

Guide cards are cards that help dispatchers ask pertinent questions of the callers depending on the circumstance. For example, is there is a structure fire, the guide card will instruct the dispatcher of relevant questions to ask before emergency services arrive on the scene.

The new dispatchers have also spent time learning about the National Crime Information Center (NCIC) and how to use it. The NCIC allows access to driving histories and criminal records, and allows messages to be sent between agencies across the United States.

The communication center has added five dispatchers to handle 911 calls, as well as computers they had previously removed and a front desk located outside the Sheriff’s Office. At a later date, a new 911 system will be installed to help improve the dispatching process.

One of the difficulties the Sheriff’s Office had with their previous communication/dispatch center was finding enough staffing to fill shifts at the 24/7 center. Fortunately, hiring new dispatchers was not an issue this time around.

“We had a number of applicants,” Sheriff Brueggeman said. “We were able to fill all the positions without any difficulty, and we’re hopeful that as we move forward if we do have vacancies that people will apply for this position.”

The Sheriff’s Office is still awaiting a new 911 system which will improve how dispatchers and emergency services are able to respond in an emergency.

Because of COVID-19 travel restrictions, the system’s arrival was delayed. The new 911 system should arrive the first week of August for installation.

It is a new computer system consisting of two screens, a phone and a map, each with a vital function in aiding emergency responders.

One screen is equipped with a phone function for accepting calls from those experiencing emergencies. The second screen has a map which will plot the coordinates of the caller’s location regardless of if the call is coming from a landline or a mobile phone.

The system can handle non-emergent calls as well, but if someone calls the non-emergency number, the system will not display a location on the map.

The system, using the caller’s location, can then suggest which primary law enforcement agency, fire department and ambulances would be most appropriate for the situation. If a fire emergency is closest to Elsie, for example, Elsie’s fire department would be suggested as the agency to respond.

Sheriff Brueggeman would like to remind everyone that in case of emergency, it is important to dial 911.

In a non-emergent situation where a sheriff is needed, like a loose dog or a pivot leaking onto a roadway, call 308-352-7500.

For administrative questions, such as questions regarding permits or vehicle inspections, 308-352-7501 is the proper number to call.

Also, because the Sheriff’s Office is opening the communication center, there are additional criminal justice security requirements in place.

Rather than just walking into the Sheriff’s Office, visitors must first talk to the receptionist, Karon Harris, at the desk outside the office area.