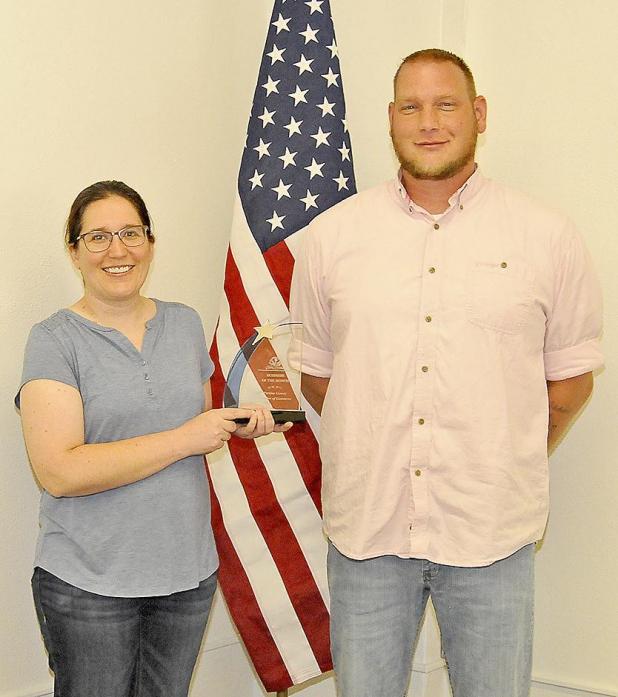 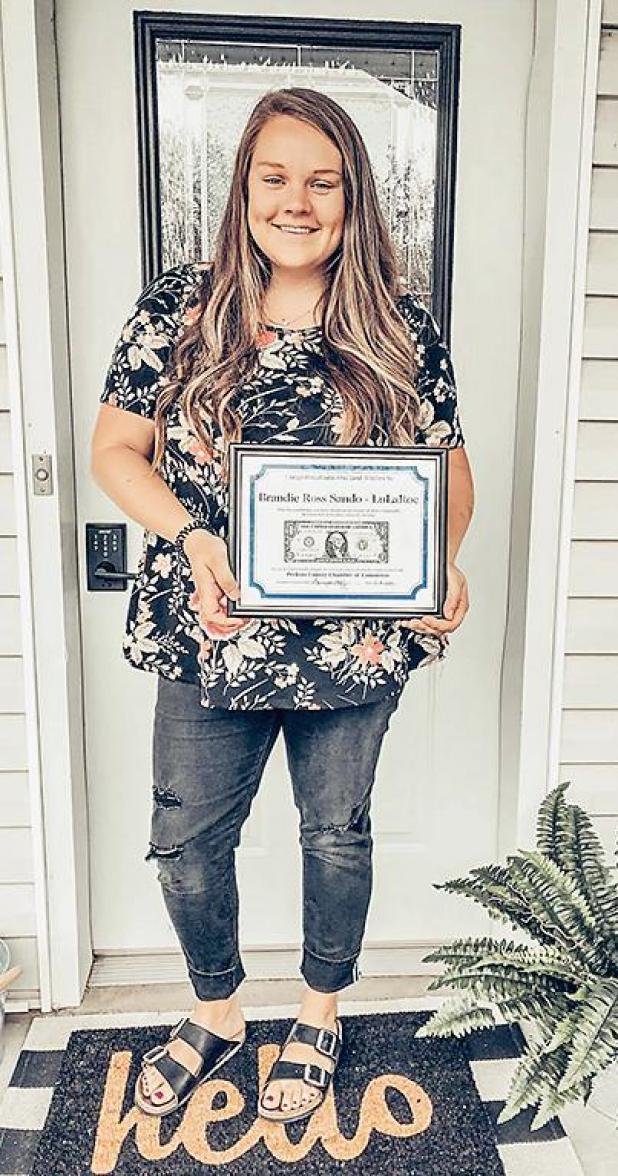 Brandie Ross Sando of LuLaRoe accepts her First Dollar as the newest member of the PC Chamber.

Despite the pandemic putting an abrupt halt on monthly meetings, the Perkins County Chamber has still been actively working to provide services to it’s members as well as spread a little positivity throughout the community.

For the last several weeks they have sponsored a $200 tab at their members who are food vendors once a week for a “Charge it to Chamber” promotion, an effort to support area business and a positive attitude in Perkins County.

Kwik Stop, The Perkins County Senior Center, In & Out, Hi-Line CoOp’s C Store have all had their turn. This week, May 20, Middle of Nowhere in Venango takes the special, and next week the free meal will be provided at Subway in Grant.

Though it was a tough decision, the Chamber Board did decide to cancel the annual community wide garage sales that are usually held the first Saturday in June. The Board will decide what the future holds for their next event, Fourth of July in the park, at their June meeting.

The newest member to Join the Perkins County Chamber is Brandie Ross Sando of LuLaRoe, a clothing boutique that Brandie has been running since 2016.

“I started selling out of my dorm room while attending college and have continued doing so, and it has been a lot of fun,” Sando said.

Sando and her husband Sean live in Madrid and Brandie can be reached online at http://shopbrandieross.com.

The City of Grant was chosen as the May Business Spotlight.

Grant was originally located about three-quarters of a mile north-west of its present location.

When the town was platted in 1886, the founding fathers missed the path the railroad would take by half a mile. Consequently, the entire town was loaded on skids or wheels and moved down the road in order to relocate beside the tracks.

Perkins County was created from the south half of Keith County in 1887. Named for Charles Perkins, president of the railroad, Grant was one of the towns competing for the county seat.

Madrid was also a hot contender. No blood was shed in the election, but there was plenty of name-calling and some minor scuffles. Over 125 years later, some still mutter over “ ... the opportunity their ancestors missed.”

Grant moved swiftly to organize the county government, which included Ben Hastings from Madrid as county judge. New businesses such as banks and restaurants were soon doing well.

The first recorded town board meeting was held on February 2, 1888. At this meeting councilmen, a village clerk and a marshal were appointed and at the second meeting a village attorney was appointed.

At an election held in April 1890, a license to operate a saloon, pool and billiard room was granted to the town.

About 1893 a large two-story frame building was erected on Lot 7, block 15. This was used as a courthouse until 1901 when the county moved its headquarters into the old First National Bank building. This structure was known as the “Old White Elephant.” It was sold in 1902 to Grant Lodge #218. A. O. U. W. After that it, was used as sort of community hall for many years. It was razed in 1940. The Grant Masonic Temple was erected in 1953 on this spot. Today this building is used for the Hastings Memorial Library which is run by the City of Grant and there is also a community room for use by the public.

In 1893, the Grant Hotel was opened, and a pharmacy was established in the community.

Other businesses in the village included a barber, well driller, lawyers, millinery hat shop, livery, feed barn, real estate business, general store, a harness and saddle store, wallpaper and furniture store, machinery, hardware, implement businesses, a lumber company, meat market and a flour mill. Other types of commerce were general merchandise, shoe store, selling of pianos and organs, depot agent, a business where cleaning pressing and tailoring were done, a jeweler and a contractor and builder.

By 1889 a teacher’s institute was hosted by Grant educators with lectures, a study of new textbooks and examinations for those who planned to become teachers. It was said that the young ladies in town distracted the businessmen, especially the lawyers.

The first telephones were installed in Grant in 1905 by the Central Nebraska Telephone Company. It was not until 1910, however, that an ordinance was passed authorizing Grant Telephone Company, to construct telephone lines in the village to serve the inhabitants and connect with the country lines.

On July 25, 1911, the first ordinance regulating motor vehicles traffic in the village was adopted. It provided among other things, “When crossing an intersection of streets within the said village motor vehicles shall not be driven at a speed to exceed six miles per hour, and on approaching any street intersection, the driver of such motor vehicle shall give a distinct signal of his approach.”

In 1915 the Council had curb and gutters put in the business section of the town and issued bonds for a new water works and for electric lights.

In 1923, a swimming pool was constructed on the hill beside the old standpipe. A new park was built in 1937 in which was constructed one of the finest band shells in the state. For many years the village provided free band concerts for the people under the direction of many leaders, the principal one being L. A. Sullivan who conducted the village bands for nearly 20 years. In 1940 another well was dug, and in 1953, a third well was drilled by the park. The standpipe was taken down in 1957 and a new water tank and tower erected near the northwest edge of the village. The old swimming pool was abandoned, and a modern pool built in the park in 1961.

It was clear that dry land farming was not going to support the homesteaders, and many needed to find jobs off the farm to keep things going. Some men went as far as Montana to cut railroad ties. The women made butter, cheese and bread to sell and others sewed or set up millinery shops to help put food on the table. Hunting provided meat-prairie chickens, cottontail rabbits and waterfowl. Ranchers, running large herds of cattle or sheep, found this area to their liking. Some ranches were just a few thousand acres, others as large as 40,000 acres. With the vast treeless land area farmers found the ideal location to plant crops. Farming has been the main income for residents of Perkins County for many years.

The town of Grant has grown into a busy little town with many notable features that include a youthful business community, outstanding medical facilities, a modern hospital and fine doctors. It has a great school system with top-notch sports and music programs. Grant has churches of many denominations, a pleasant park with a heated swimming pool, tennis courts, band shell and picnic area. Grant has a lively historical society-museum which includes a turn-of-the-century home, a 1900-era school and a large display building.

Dunn explained that the City of Grant’s focus has always been and will be the safety and wellbeing og the citizens. “The City is currently focused on improving the housing situation in Grant. The City hopes to have some new housing developments in the near future, with an additional focus on revitalizing downtown. We have a strong healthcare system, school and youthful business ownership and are uniquely located on two intersecting highways and only 20 miles south of Interstate 80,” he said.

The City of Grant is ran by the Mayor/Council form of Government. The Mayor and four Council Members are voted into office by a vote of the people with both serving a four-year term and the Council Seats are offset as to only allow two seats to be voted on at a time.

The City of Grant has six full-time staff with five permanent part-time employees. During the summer months that number increases due to the operation of the swimming pool, summer ball program and groundskeeping.

In 2021 we will be excited to open A NEW SWIMMING POOL!!!, a project that has been in the works for about 8 or more years.”

The City of Grant office is located at 342 Central Ave., in Grant and can be reached at 352-2100 or by visiting their new and improved website at www.grantnebraska.com.