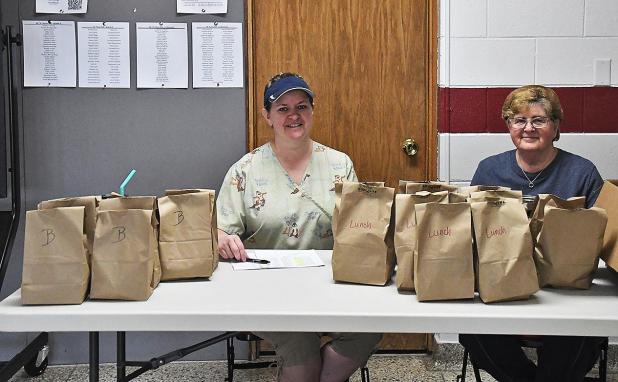 Stacy Clark and Christi Klima were ready to hand our more lunch and breakfast bags at the jr./sr. high Monday morning. The bags are available evrey school day in five different locations in the district.

Coronavirus still in the headlines

Coronavirus continues to dominate local, state, national and even international headlines as more cases are discovered here and abroad.

So far, much of Southwest Nebraska and parts of Northeast Colorado have managed to escape the virus as of Tuesday afternoon.

With the exception of Lincoln County, none of the other bordering counties to Perkins County have reported a confirmed case of the virus, also known as COVID-19.

In neighboring Northeast Colorado, cases have been confirmed in Yuma, Logan and Morgan Counties.

The closest case of the virus to Perkins County in Nebraska was diagnosed in North Platte.

Perkins County Health Services have tested just one individual and that test came back negative.

PCHS CEO Neil Hilton said that was really good news. The individual was tested for the virus on Wednesday, March 18. It took until Monday, March 23 before the results of the test were known.

“That gives you an idea of the turnaround time to get a test back,” he said.

Before an individual is tested for COVID-19, Hilton said they follow a protocol that first tests for both influenza A and B, and a respiratory viral panel.

The influenza tests can be conducted at the hospital while the viral panel has to be sent to a lab in North Platte.

If symptoms still warrant after getting those results, then the individual will be tested for COVID-19.

Hilton said that test is sent to the North Platte lab, where it is farmed out to other testing labs. Last week’s test was run at the Mayo Clinic in Minnesota.

With a five-day turnaround, it’s possible a person could already be on the way to recovery if a positive test is confirmed, he noted.

PCHS is continuing their policy to allow no visitors to Golden Hours or Park Ridge Assisted Living.

That age demographic has shown to be the highest at-risk  age class and the virus is responsible for a large number of elderly deaths thus far.

At the hospital, only immediate family over the age of 18 are allowed as visitors.

At the outpatient clinics and other service areas, such as physical therapy and diagnostic imaging, only one adult is being allowed to accompany the individual.

Hilton expressed his thanks for people understanding the need for these precautions and adhering to them for the safety of all.

Perkins County Schools Superintendent Phillip Picquet praised his staff for the job they have done thus far to continue the educational process.

The first lunch/breakfast distribution was done Thursday. Packets with some educational opportunities were sent along with the lunches.

A total of 18 lunches were distributed the first day. By Tuesday, that number had doubled and Picquet expects it to keep increasing.

Still with the uncertainty of how long school will be closed, his staff has been evaluating how best to push out curriculum so learning can continue. It’s imperative that the school continue to educate all students in the district in this environment.

While work will not be graded, Picquet said it will be assessed to measure student progress. That will be key for next fall, he said, if school is unable to reconvene this year.

The school has a 1:1 ratio of kids to computers from grades 6-12. That will allow teachers to create an alternative learning opportunity

A survey by staff indicated less than 25 students do not have access to adequate internet access. To get around that, he said they will put the same downloadable material on a flash drive so the students can still do the work without internet access.

Picquet hopes their efforts sends the message that they are here to educate students and move forward, especially during these uncertain times.

In some respects, he said  they fell like their still building the plane while flying it.

In Grant, many of the businesses continue to operate  but are limiting or prohibiting walk-in traffic.

The city office is closed to the public but is ready to assist customers by phone, email, etc.

The council’s Tuesday night meeting was still held by teleconference. The governor waived a statute for the time being that prohibited the council from conducting a meeting by video or tele-conferencing.

The Perkins County courthouse is now closed to the public. They are asking people to call and make an appointment to limit any possible exposure.

Clerk Rita Long said a lot of county business can be conducted online, by phone, email or regular mail.

In order to limit the spreading of the virus, the governor has limited groups to no larger than 10 people.

That’s affecting things such as funerals. In some cases, family burials are being held first, with plans for a funeral or memorial service at a later date when this all subsides.

People are also asked to practice social distancing,  by keeping at least six feet between each other.

The typical symptoms of COVID-19: fever, sore throat, cough and difficulty breathing. The best defense against respiratory illnesses such as COVID-19 and influenza are consistent social distancing and diligent hand washing.

When coughing or sneezing, do so into one’s sleeve or a tissue, which should then be discarded.