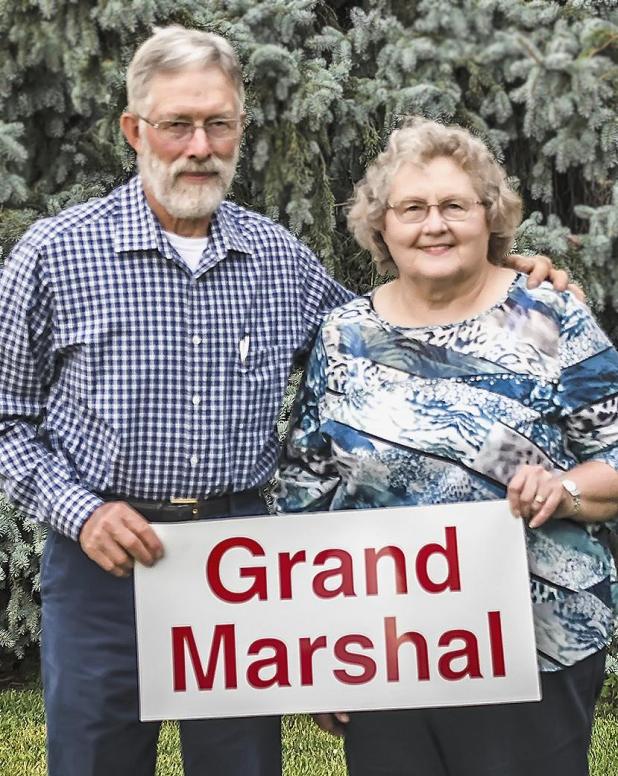 Dennis and Ruth Demmel were selected as Grand Marshals this year.The Demmels have been active members of the community since they moved to Grant 37 years ago.

Dennis and Dr. Ruth Demmel have been nominated as this year’s Grand Marshals.

Throughout the years, they have proven to be a staple within the community.

Those who nominated Ruth say she is always a great school supporter, providing cookies and support for school events, and she is a great doctor in the community. Dennis  has contributed to the community in many ways, including participating in committees and organizations in the area.

Ruth, 69, grew up in Grant with her four siblings at the home where she and her husband Dennis, 71 currently reside. Her parents, Robert and Delores Swan, built the residence and operated a farm there for many years.

Ruth graduated from Perkins County High School in 1968 and moved to Lincoln to attend college at the University of Nebraska Lincoln to study chemistry.

Dennis, on the other hand, is native to eastern Nebraska. He was born in Madison County where he grew up on a farm with three siblings. He graduated from Madison High School in 1967 before heading to college to study engineering.

She met Dennis at UNL. They both attended church at the university’s chapel where they both became officers for the student body. They fell in love and married in 1972, the same year Dennis graduated from UNL with a degree in Mechanical Engineering.

Ruth later graduated with her M.D. from the University of Nebraska Medical Center in 1975.

In 1983, the couple moved to Grant where they raised their three children, Paul, Sarah and Laura. Ruth began practicing with Dr. Cliff Colglazier where she remains to this day.

Dennis had always held an interest in agriculture and farming. When Ruth’s parents were nearing retirement, they gave Dennis and her an opportunity to take over their farm, an offer which Dennis gladly accepted.

“You know, when I moved here in ‘83 I really didn’t know a lot of people apart from some relatives,” Dennis said. “But I would say that I was really well received here by people in our church and the community, and I really felt good about being here.”

Ruth says Grant is a great place to grow up and to watch their kids grow up. Now, their kids have grown up, moved all over the country and have started families of their own. The Demmels have three grandchildren, ages 2, 3 and 5.

Since returning to Grant, the Demmels have been active and respected members of the community.

They attend Trinity Lutheran Church together, and even though they could not attend through the early stages of the COVID-19 pandemic when churches no longer held in-person services, they viewed online services together.

In recent years, he has been most active as co-chair for the Perkins County Community Foundation Fund. He’s also on several boards for non-profit organizations.

Dennis says being active in these committees and boards has opened his eyes to what is going on in the county, such as population changes and economic growth.

Ruth has dedicated the last 37 years to her physician work, and has helped countless numbers of community members through her work. She is very involved with the hospital and the clinic, as well as the church. She will occasionally play the piano or organ for church.

One way Ruth says she’s known around town is for her chocolate chip cookies. She will often bring her cookies, made with her mother’s recipe, to the hospital and to school events. She says it takes about an hour to make a batch, and she loves to bake.

Outside of work and community obligations, Ruth and Dennis enjoy many relaxing hobbies in their spare time.

She is also a fan of hand-written notes and personal cards. She says she can usually find a card that is pretty well connected to the person she is sending it to, and she works really hard to find the right one for each individual.

Ruth writes one of Dennis’ uncles, who is around 90 years old, somewhere around once a month. During a particularly difficult time in his life, Ruth was sending him  notes once a week. Since he used to live here, she would fill him in on weather, crops and other news in the area.

“His memory is failing—not horribly, but he can’t always remember phone calls, but he can always look at the card again,” Ruth said.

Dennis enjoys gardening and landscaping, and going out to dinner with Ruth just to have some time alone together.

Since he is somewhat retired, only working part time after selling the farm to a couple around five years ago, he has more time for his hobbies. He still enjoys being involved in the farming business, as it has always been an interest of his.

“I was surprised,” Ruth said regarding learning she and her Dennis were selected as Grand Marshals this year. “I feel honored.”

“I guess I didn’t think she should be surprised, because she’s been a major contribution to the community in the medical field,” Dennis noted about his wife’s surprise.

Ruth says she is very grateful for all her medical staff, Dr. Colglazier and the entire medical community, both at the clinic and the hospital. She’s been practicing with Dr. Colglazier since she moved back here so he has been incredibly helpful throughout her time in Grant.

The nurses and support staff help her do what she enjoys every day, and throughout the years they have been wonderful to work with.

“Not all communities are that blessed,” Ruth said.