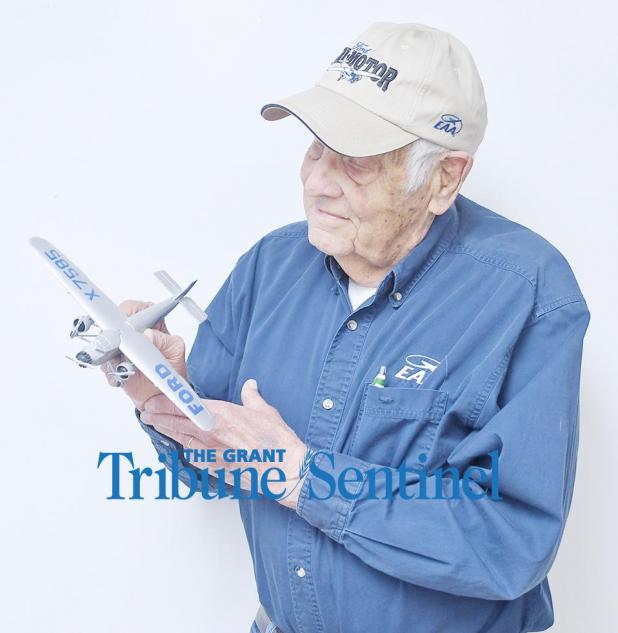 Leon Kumor of Grant admires his model of the Ford Tri-Motor.

Fly the Ford, one of two left in the world

Area residents will have a rare opportunity to experience history from the air this weekend in one of two Ford Tri-Motor airplanes left in the world.

Known as the first luxury airliner, the Ford Tri-Motor redefined world travel and marked the beginning of commercial flight.

The Southwest Nebraska Chapter of the Experimental Aircraft Association (EAA), which includes Perkins County, will be hosting the 1928 Ford Tri-Motor F-AT at North Platte Regional Airport this Thursday through Sunday, June 6-9.

Leon Kumor of Grant, who’s been a member of EAA for over 30 years and flying for nearly 60, said this is the first time the Ford’s national tour has stopped in the area. The chapter requested to host the tour stop, which must meet several requirements to qualify.

Kumor and his wife Charlotte had the opportunity to “Fly the Ford” a few years ago at the EAA’s annual convention in Oshkosh, Wisconsin.

AirVenture, “The World’s Greatest Aviation Celebration”, is a seven-day event that brings in aviation enthusiasts from all across the world. Kumor estimates he’s attended over 25 times.

Liberty Museum’s Ford Tri-Motor 5-AT can carry up to 10 passengers and every seat is by a window. Each flight is approximately 30 minutes with about 15 minutes in the air.

Those wishing to fly can book advance online at www.FlytheFord.org or by calling 1-877-952-5395 for discount pricing at $72 per adult.

Walk-up pricing is $77 for adults and $52 for children 17 and under. Children under age 2 can be carried free of charge in an adult’s lap. An adult must accompany children under the age of 16.

A liability waiver must be signed and passengers should check-in onsite as early as possible.

Ford Motor Company founder Henry Ford, who had already changed America through his automobiles, also had a vision for moving people through flight. He saw a time when people would travel across America in airplanes at speeds surpassing the fastest railroad.

Many thought this was preposterous, but Ford was driven to prove his concept.

Although fewer than 200 of the Ford Tri-Motors were built over a seven-year period before newer technology took over, it showed that passenger flights were possible on a grander scale than ever imagined.

The 1928 Ford Tri-Motor 5-AT that will be in North Platte was No. 8 of the aircraft’s run, coming off the line in December 1928. It serviced for Transcontinental Air Transport (TAT) and later Transcontinental and Western Air.

The airplane then flew as a tour aircraft over the Grand Canyon and Boulder Damn in 1937, and after that an airliner in Honduras and various service in Mexico through the 1940s.

After a lengthy period in storage during the 1950s and early 60s, the Tri-Motor was purchased in 1964 by William Harrah of Harrah’s Hotel and Casino. Harrah had the aircraft restored and had it flying beginning in 1971. It was then displayed with his renowned automobile collection in Reno, Nevada.

After Harrah’s death in the mid 1980s, the aircraft was auctioned off to an Idaho owner. It eventually found its way to the Evergreen Aviation and Space Museum in McMinnville, Oregon in 1990.

In 1996, the plane was again restored and returned to flying condition. Ed Patrick and the Liberty Aviation Museum obtained the aircraft in 2014, completing restoration updates before working with the EAA to fly the historic aircraft to locations throughout North America.