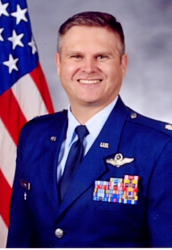 Col. LeVan praised Lt. Col. Thomas’ career and numerous accomplishments while adding some humorous highlights from his days as a young officer. She highlighted his love and dedication to the 45th Reconnaissance Squadron, which Lt. Col. Thomas commanded from 2015 to 2017.

Col. LeVan also recognized Mrs. Aimee Thomas for her dedicated support to Lt. Col. Thomas and most especially her support as a Key Spouse Mentor.

Lt. Col. Thomas was presented the Meritorious Service Medal for his service as the 55th Operations Group Deputy Commander, responsible for organizing, training and equipping the group’s 2,600 personnel in 11 squadrons and two detachments to execute global airborne intelligence, surveillance and reconnaissance, and treaty verification missions as directed by the President, Secretary of Defense, Joint Chiefs of Staff, Combatant Commanders and national intelligence agencies. The 55th Operations Group is the largest operations group in the United States Air Force and operates seven separate models of aircraft.

In this capacity he managed 2,700 personnel and 33 aircraft from six mission design series, valued at $7.3 billion, to execute pre-deployment training for 1,050 personnel.

Lt. Col. Thomas then thanked his colleagues, friends and family for their support over the years and acknowledged one question that had been asked, “Is there anything you felt was unfinished in your Air Force career?”

He responded, “The only thing unfinished is getting the correct number of aircrews to meet the mission demands, the math is simple, for each deployment crew, three crews are needed. Spin-up, Deployment Reconstitution – that is the cycle and we aren’t able to get there yet – the wing and Air Combat Command have pushed it but these needed ISR warriors aren’t here yet. That is what is unfinished. All else is done.”

Lt. Col. Thomas recognized and thanked his parents, Leland and Betty Thomas of Grant, for their love support and guidance as he grew-up, and his in-laws, Kenny and Linda Bro, for their love and support.

Lt. Col. Thomas closed the ceremony with the following:

Check open source....China, Russia and North Korea are not our friends; Mission First...People Always; Do what’s right, to hell with the rest; You are the best Air Force in the world and I love you.

Lt. Col. Thomas grew up in Grant and graduated from the University of Nebraska in 1997. He received his commission in 1999 as a graduate of Officer Training School at Maxwell AFB, Ala. He attended Joint Specialized Undergraduate Navigator Training and Electronic Warfare Officer (EWO) Training in Randolph AFB, Texas, graduating in the summer of 2000.

He was assigned to Offutt AFB, Neb., where he has served in the 45th Reconnaissance Squadron and the 338th Combat Training Squadron as an Executive Assistant, Evaluator/Instructor EWO and Flight Commander in charge of RC-135 EWO training.

Lt. Col. Thomas also career broadened under the Phoenix Wrench program as a Maintenance Operations Officer in one of Air Combat Command’s (ACC) largest Maintenance Groups. He was 338th CTS Company Grade Officer of the Year and 55th Wing Instructor of the Year, having previously earned the Group and Squadron awards.

He was the leader of the team recognized with AETC Learning Innovation Award, AETC Top Operations Squadron and AETC Chief of Staff of the Air Force Team Excellence Award.

As the Chief of the C2ISR Division’s largest and most diverse branch, he managed a $43 million budget and set ACC policy to support national intelligence requirements and was responsible for global and special C-20 operations.

He returned to Offutt AFB, Neb., and served as the 55th Operations Group Director of Staff and 45th Reconnaissance Squadron Director of Operations.

He and Mrs. Thomas will remain close to their children Josh, Savannah and Max in the Omaha metropolitan area.