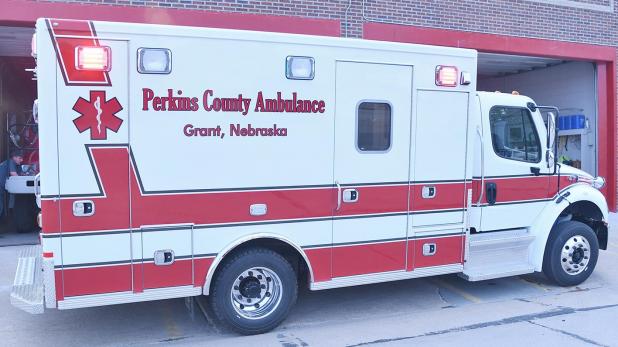 Ambulance Lieutenant Chasity Knoles said it should be in service sometime next week.

Perkins County Commissioners accepted the one bid received for a new ambulance at a May 2018 meeting.

Chad Sitorius of FYR-TEK of Gothenberg submitted a $233,072 bid for the 2019 M2 Freightliner Superliner Life Line ambulance, diesel, with a medium-duty style chassis.

Striping and lettering were an included option.

Additional options were included in the quote, all of which were added.

Then Fire Chief Don Softley said they purchase ambulances as they can afford them, and the more the ambulance operates, the more income it generates.

The department currently utilizes the power cot, but the power load will be a new, welcomed feature.

Ambulance Captain Bob Tatum said the power cot is nice because it can be moved to any height with the press of a button, making hospital bed transfers much easier. He said it’s essential in transferring heavier patients.

The power load loads the cot into the ambulance.

The current transfer ambulance will be transitioned to the local ambulance.