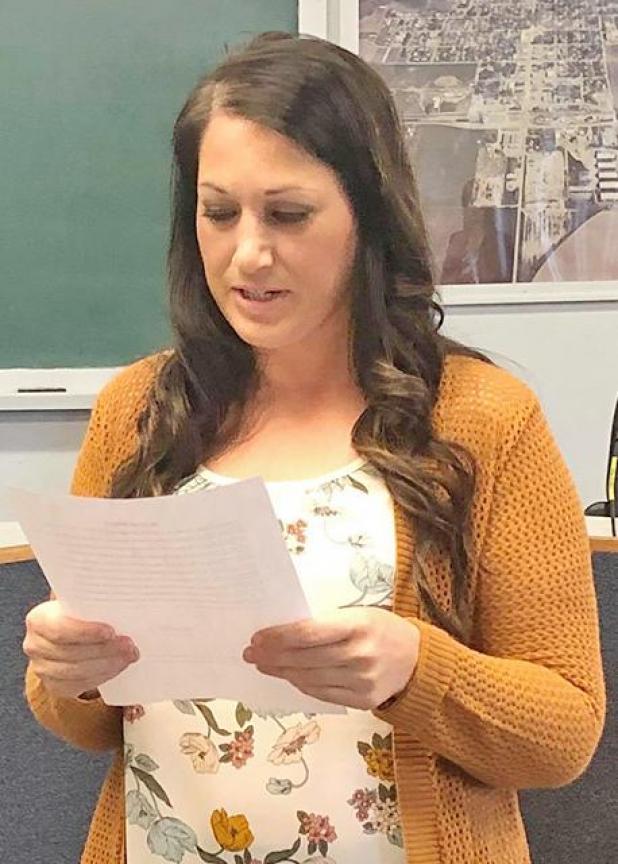 Tierney Peterson is sworn into office.

Tierney Peterson was sworn in as the newest Grant City Council member on Monday morning, June 3.

Mayor Lisa Schmitt nominated Peterson at the council meeting on Thursday, May 30 to replace the council seat vacated by Edward Dunn, who resigned after accepting the position of city superintendent.

The May 30 meeting was forwarded from May 28 because a quorum was not present.

Bids were received and approved for street improvements on Fourth and Fifth Streets and Hancock Avenue.

Brett Burkland of TC Engineering presented bids from CSC Construction in Grant, which were over $100,000 less than the engineer’s estimate.

Bids were received for both concrete and asphalt patching on Hancock Avenue, coming in at $91,371.50 and $12,190 respectively.

Burkland said in general, asphalt has a 10-15 year lifespan and maintenance is more expensive than concrete. He recommended doing Hancock in concrete now because it will be more expensive to do later, but he understood the higher price had to be considered to address budgetary needs.

With $250,000 budgeted in capital outlay, Schmitt recommended asphalt patching Hancock and concreting Fourth and Fifth for a total of $179,879, leaving room in the budget for a potential street sweeper as originally planned. To concrete all three streets would total $259,064.50.

Brueggeman and Bishop voted to asphalt Hancock and concrete Fourth and Fifth Streets, with Schmitt voting yes for the required three votes.

The Perkins County Hospital District submitted a letter petitioning the city to have the Frederick property annexed into city limits.

The council tabled the request until the hospital board provides them a survey of the property.

In a search for the city charter for the City of Grant, City Attorney Tawna Holmstedt came up empty-handed.

Holmstedt said she checked with the Secretary of State’s office, the Attorney General’s office, the Nebraska Historical Society, the county clerk, the county attorney, the library and searched the city office.

She said in her research, when the city was founded, it wasn’t a requirement to have a city charter. And even if the city did have a charter, it would not be relevant as law today, as state statutes and the city code book now govern the city.

Bids for pool and golf course

The council voted to accept proposals for architectural, engineering and consulting services to develop concepts and bids for the replacement of the swimming pool.

They also voted to accept bids for the replacement of the metal roofs of the clubhouse, picnic shelter and two golf cart sheds at Pheasant Run Golf Course

• Harlan Brott of Little Country Kitchen was approved for a special designated liquor license to serve at a wedding on June 29.

• Dennis Hansen was re-elected as the president of the tree board and Doug Beck was elected as vice president.