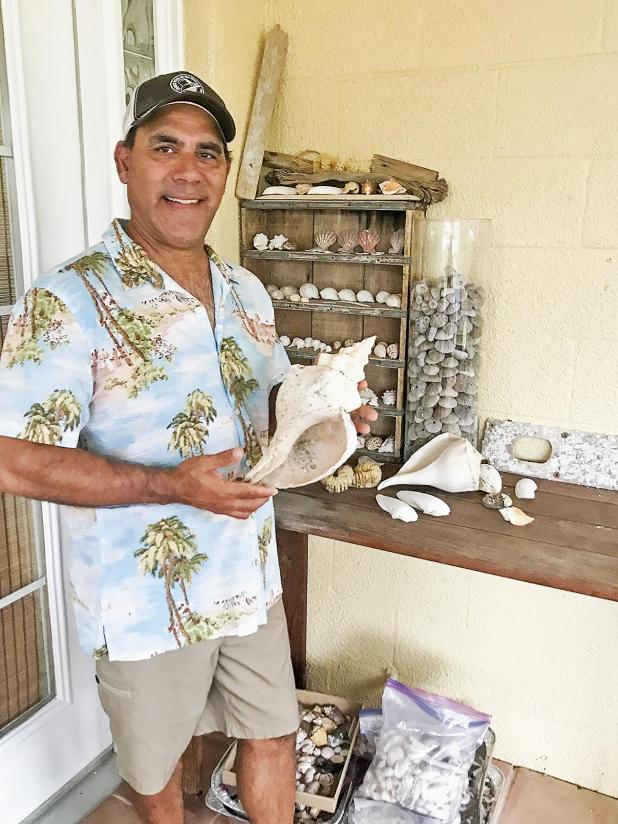 Grant native Brian Holoway holds one of the conch shells from his seashell collection that he shared during a zoom session with PCS third and fourth graders. 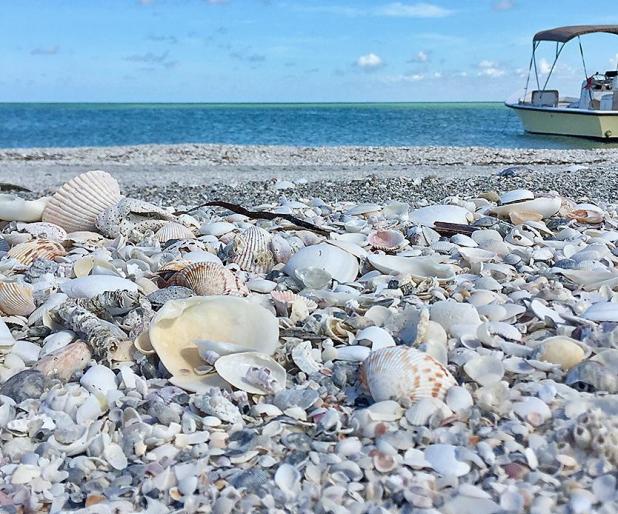 The beaches in west Florida are famous for the amount of sea shells that wash up on them.

School kids zoom to Florida to learn about ‘shelling’

Perkins County Schools students experienced a school year unlike any other in school history.

After COVID-19 shut down schools throughout Nebraska and the country, the way students learned and the way teachers taught changed dramatically.

Switching to an online-based curriculum provided both challenges and opportunities.

One of those opportunities came to the third and fourth graders when they got to learn all about “shelling” from Grant native Brian Holoway.

Holoway, the son of Doni and the late Lyle Holoway, graduated from Grant in 1987. After completing college at the  University of Nebraska-Kearney with a fitness and leisure management major, he headed to Florida and he’s been there ever since.

Holoway’s education really only began after arriving in Florida.

Interested in nature and the ocean, he took a variety of classes and earned the designation as a Florida Master Naturalist.

Growing up, he was a fan of the famous oceanographer Jacques Cousteau and knew he always wanted to work on the water somewhere. He ended up in Fort Myers, which is on the west coast of Florida on the Gulf of Mexico.

The warm Gulf waters along the beaches of Fort Myers and the area wash up thousands of sea shells each day.

About 25 years ago, Holoway started “shelling,” which means he finds and collects those shells from those  beaches.

Over time, Holoway became an expert guide in shelling, That, along with his love of nature and expanded education, allowed him to turn his passion into his business.

He operates “Captain Brian on the Water”, which provides private eco-tours to areas and local islands only accessible with his boat.

His four-hour trips include anything from cultural to history to anthropology, environmental and plants. “They’re all custom trips.”

The Fort Myers area is considered one of the premier shelling regions. As a result, he has clients who come back year after year, just to have Holoway guide them on private shelling expeditions.

Shelling remains an important quest for him. He estimated he goes shelling at least 250 days a year.

As a result, he has amassed quite a collection from tiny shells to massive conch shells.

In late April, he shared his collection and experiences with PCS second and third graders via a zoom presentation from his home set up by teachers at PCS.

Holoway told the students one of his most prized shells is a junonia shell. In all of years shelling, he’s only found three.

That’s because the junonia lives in 100 to 400 feet of water and usually only washes up on shore after strong wind storms or hurricanes.

It’s so rare that Holoway remembers the exact day in December 1996 when he found his first one.

Ironically, earlier this year, his friend, Doug Rezac, another Grant native, was visiting when they ran across one while shelling on the beach.

He and Rezac even got their picture in the local newspaper for the find.

During their zoom session, Holoway also shared things about the climate, trees and surroundings. He said he tried to put himself back when he was a fourth grader.

He said he’d never seen a mango tree as a kid so he was trying to focus on other experiences in addition to his shelling.

Started on another boat

Holoway originally took a job working on a boat so he could be close to the water. Eventually, he became the captain and then decided to branch out on his own.

His knowledge of nature and the region has expanded the notoriety of his business.

He does scout work for photo shoots for different magazines and companies ranging from UK National Geographic to LL Bean.

He and his wife, Melanie, and 17-year-old daughter Sage  have been holed up in the house due to the COVID-19 pandemic.

He said Sage helps film Wildlife Wednesdays, which he puts up ever week on his Facebook page.

He said she’s a big help and knows the wildlife, having gown up there. He added she’s become quite a photographer in her own right.

Like everyone, he’s ready for things to get back to some semblance of normal.

“This is the longest I’ve been off the water in quite a few years,” he said.