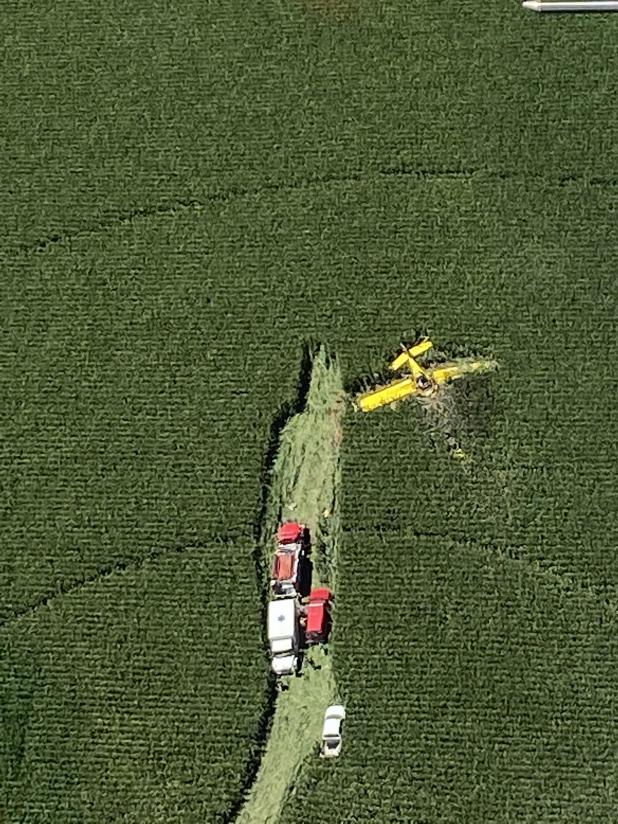 Emergency vehicles drove through a corn field south of Grant to access a downed spray plane.

A 31-year-old Tennessee man perished Saturday when the aerial spray plane he was piloting went down in a cornfield south of Grant.

Brueggeman said Tuttle was a contract pilot flying for Aurora Cooperative when the accident occurred. The plane was owned by Aurora Co-op.

The call came in at 12:05 p.m. His office, along with the Grant and Madrid fire departments, were dispatched to scene.

Brueggeman said another pilot spraying nearby lost sight of the plane and efforts to contact Tuttle were unsuccessful.

After finishing the load, the pilot flew over the field and spotted the downed plane in a cornfield seven miles south and a half mile east of Grant, off Road 753.

Brueggeman said they believe the plane went down somewhere between 11:40 to 11:50 a.m. Perkins County Coroner Rick Roberts pronounced Tuttle dead at the scene.

An autopsy was ordered since it was an unattended death.

Investigators with the National Transportation Safety Bureau and Federal Aviation Administration were on the scene Sunday, according to the sheriff.

Ironically, a single-engine plane went down around the same time shortly after takeoff from a private strip south of Imperial. The aircraft was a fixed-wing VANS RV-6.

The pilot and his passenger were transported to the Chase County Community Hospital where the pilot was treated for minor injuries and released.

The passenger sustained serious, non-life threatening injuries and was transported to a medical facility in Colorado, according to the Chase County Sheriff’s Office.

Sheriff Brueggeman said there was lots of activity over the weekend.

Severe weather conditions were experienced both Friday and Saturday night.

Firemen responded to a lightning strike that hit a home in Grant Friday night.

Late Saturday afternoon, another storm cell with high winds, rain and hail struck an area west and south of Brandon.

Winds as high as 75 mph destroyed a steel quonset and wind-driven hail totalled crops in the area.