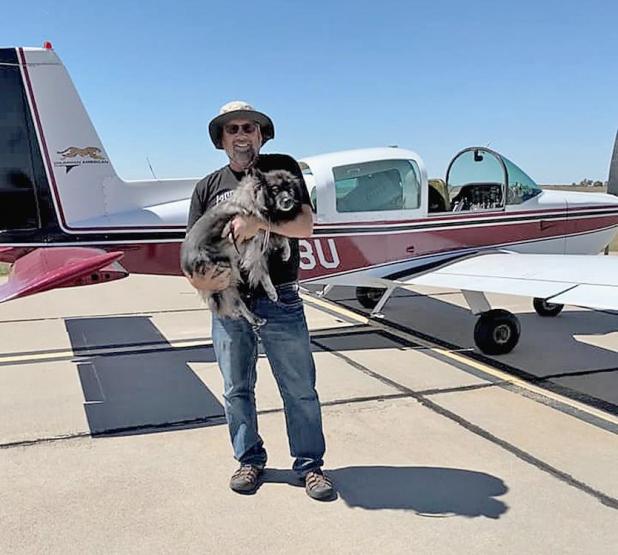 Scott Angel and Suzy prepare to take off on their trip to the Canadian border. Angel said Suzy was very calm and handled the flight well.

Suzy, a 10 year old keeshond, was brought into the local animal shelter around a month ago after she was retired as a breeding dog.

Christy Bacon at Perkins County Animal Shelter said Suzy was shy and reserved during her time at the shelter, and she loved being with other dogs.

The animal shelter listed Suzy up for adoption on the website Petfinder, where her new owner Monica Molnar from Winnepeg, Manitoba discovered her.

After a couple of weeks, the application process was completed, but there was still one challenge: how was Suzy going to get to her new home in Winnepeg?

After finding the request in a forum for an organization called “Pilots N Paws,” which connects pilots with those in need of having a pet transported, Scott Angel of Spencer, Neb. decided he would take on the responsibility of bringing Suzy to her new home.

Angel just got his pilot’s license earlier this year, and it has gone to good use.

“I just wanted to rescue animals that need to go to their adopters,” Angel said.

On Wednesday, September 2, Angel took a two hour trip to Grant to pick up Suzy, two hours back to Spencer. From there, the trip was a four and a half hour flight to Pembina, N.D. where Suzy was transferred to a transport service that brought her the rest of the way to Winnepeg.

According to Angel, Suzy handled the flight very well, and was very calm during their travels together.

Bacon said distance adoptions are not uncommon for the Perkins County Animal Shelter, but this is only the second adoption to Canada she could remember.