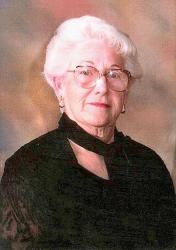 Betty J. Nash (Gebhart), was born June 6, 1931 to Ralph and Arlie Gebhart, in Grant, Nebraska.  She died January 21, 2020 due to complications related to age and dementia. Her parents and all siblings preceded her in death.

Betty married Jim Erb in 2000, who also preceded her in death.

Mom was very proud to be a Nebraska farmer’s daughter and granddaughter. She went from a country girl to being a world traveler. She took each of her children and most grandchildren on trips out of the USA—Africa, Peru, Japan, southern England, Germany, Australia and Russia being some of the places she visited.

Dogs were an important part of mom’s life.  Paddi, the Australian cattle dog mix was her last and most cherished.

Burial and celebration of life will be private.  In lieu of flowers, please donate to your local animal shelter in her name.  Condolences may be shared at www.jenkins-soffe.com.