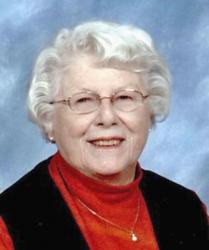 The Lord blessed her parents and family 93+ years ago with one of the most wonderful Christmas presents you could ever have, a bouncing baby girl, who they named Betty Eloise Richmond on December 25, 1926.  The Lord blessed her journey by peacefully taking her gently in His arms to heaven the afternoon of January 19, 2020.

She was born to Harvey C. Richmond and Cynthia A. Richmond (Erlewine) in their home on their farm northeast of Grant, Nebraska.  She enjoyed all of the normal childhood family outings, games with others, etc.  She attended a country school about 1/8 of a mile from their home where she graduated from the 8th grade and then she attended high school in Grant, and later graduated from.

While attending high school, she met the love of her life Robert (Bob) P. Stohler.  They were married in Ogallala, on June 24, 1942.  They worked for several different large farmers in and around the Grant and Brule Nebraska area until early 1946 when they rented a farm southwest of Elsie.

They worked hard together doing whatever needed to be done.  They built wonderful relationships with several of the neighbors and were always there to help one another.

Betty was one of those very unusual women who was ready to go out and run a tractor in the fields if need be, she kept the house, cooked for her family as well as any of the neighbors who might stop by, she helped with the livestock (cattle, sheep, and hogs) and raised chickens and took the eggs to market.

She was also quite active in the women’s homemaking club where many of the neighbor women gathered once a month to embroidery and quilt.  She was also a very skilled seamstress.

Betty was well known for her ability to bake, especially when the Elsie school was having bake sales for her German Chocolate Cakes.  She made many other items that she donated, but the first request was for one of her cakes.

In March of 1965, they moved to Colorado Springs, Colo. to start a new way of life for them. They were still ready to help family, friends, and neighbors.  Betty started out as a housewife and mother when they moved into their home.  Later decided she wanted to do something additional in her life so she tried babysitting for a little while and then she decided to work outside the home part time and worked at Montgomery Ward for a Christmas season.  She decided she wanted to pursue a full-time position outside the home and started working for Wright Glass Company in January 1968.  She continued to work there doing bookkeeping and meeting with customers until she retired July 1, 1985.

She and Bob enjoyed their retirement and did some of the things they had always wanted to do.  They enjoyed camping and traveling to different parts of the country.  They went south for the winter a couple of times.

They enjoyed just starting out and seeing a road they hadn’t been on and seeing where it went and often times, they saw a lot of beautiful countryside on these journeys. They greatly enjoyed their time together until Bob became ill and went home to the Lord in 2001.

In 2003, a good friend of Betty and Bob lost his wife, Robert (Bob) Fry, and after a time they started going out and enjoying each other’s company.  They then became companions and spent much time together.  They did some traveling together and enjoyed life together until his health declined in June 2019.

Betty will always be remembered by family and friends for her loving and caring ways.  She found ways to help and do things to benefit others and was seldom seen without her wonderful smile.

Betty was preceded in death by her parents, her brother, Ernest Richmond, and her husband, Robert.

The family would like to thank Intermin Hospice Care Team for their loving and caring support during Betty’s last few weeks.