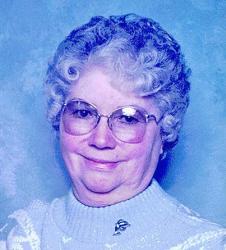 Beulah Ann (Harrison) Harris was born Dec. 11, 1933 at the Chase County Hospital in Imperial, Nebraska. She was the youngest of four daughters born to James Edward and Anna (Maris) Harrison.

Beulah grew up on the farm in rural Dundy County. She attended Eden Grade School and high school in Wauneta, graduating in 1951. She attended McCook College and then took correspondent classes off campus; she received her teaching certificate. Beulah taught school for two years in rural Perkins County.

She married Ronald Keith Harris on Nov. 16, 1953. To this union they were blessed with two boys, Terry and Kevin. They made their home in Imperial where Beulah was the bookkeeper for their family owned business, Harris Construction Co. for forty years; she also kept the books for the Added Touch for 13 years.

Beulah was on several boards in Imperial including the election and cemetery boards for several years.

Beulah enjoyed playing the piano and the accordion. During her younger years in Imperial, she played in a band called Bill Wright and the All Rights. For a number of years she served meals to entertainers at the Chase County Fair. Beulah enjoyed spending time with friends and family; she most enjoyed her grandchildren and great-grandchildren.

Beulah passed away Thursday, Jan. 16, 2020 at the Chase County Community Hospital in Imperial. She was 86 years of age.

She was preceded in death by her parents, husband, her son, Kevin Harris, great-granddaughter, Terra Harris, sisters Lois Bley and Leona Hunt and niece, Lynetta Wine.

Visitation was held Monday, Jan. 20 from 3-6 p.m. at the funeral home in Imperial.

A memorial has been established to the Harris family to be used towards college funds for Beulah’s great-grandchildren.