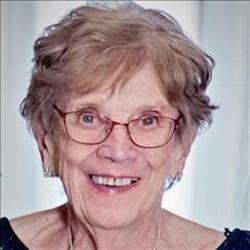 Darlene J. Hatch, 86 of Grant, passed away January 5, 2020, at the Perkins County Hospital in Grant.

Darlene was born July 25, 1933, on the family farm southeast of Ogallala to Frederick and Sophia (Rentschler) Hansmeier and was baptized at St. John’s Lutheran Church in Ogallala. She graduated from Ogallala High School. Darlene graduated from Business College in Grand Island before going to work at the Army Depot in Sidney.

On August 21, 1955, Darlene married Earl Hatch. The couple moved to Oakland, where Darlene worked at Kaiser Health and Earl at Safeway. Their union would be blessed with three children, Kevin, Kirk, and Kendra. The couple moved to Grant in 1961, when they purchased the Red & White Grocery Store from Earl’s father.

They built Hatch’s Market in 1963, at its current location on the south edge of town. Darlene was always devoted to the store and was perpetually “on-call,” but her defining role was as a mother and nurturer.

Darlene was a steadfast cheerleader to her children and grandchildren; she was always their biggest fan. She was loving, compassionate, and liked to have fun. Darlene had a way of connecting with people, and age gaps never seemed to make a difference.

In the early 1970s, the family bought a home at North Shore, Lake McConaughy, which became a special place for Darlene. She cherished the summers that she spent there with family, where she made so many wonderful friends and memories.

She had a knack for making the people around her feel like they were the most special people in the room, but it was Darlene who was the rock and matriarch of the family.

She was an avid fan of Husker athletics, and proudly sported red on game days, whether it was volleyball, football, or anything in between.

Darlene was also blessed to have traveled extensively in her retirement, having been to all fifty states and several different countries, including Mexico, Australia, New Zealand, and Germany.

Services will be held today,  on Wednesday, January 8, 2020, at 1:00 p.m. at the Zion Lutheran Church in Grant with Pastor Ben Francisco officiating. Burial will be in the Grant Fairview Cemetery.