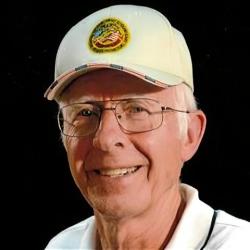 Larry was born November 8, 1949, at Grant, Nebraska, to Ralph and Erma (Bauer) Kuskie. He attended country school before graduating from Perkins County High School with the class of 1968.

Larry entered the U.S. Army in November of 1968. He completed basic training in Washington and served in Vietnam as a supply chain specialist. Following his honorable discharge in 1971,

Larry returned home, where he helped on the family farm and the building of his parents’ farmhouse. Larry eventually went to work at Dudden Implement in Grant as the shop foreman.

On May 20, 1978, Larry married Norma Jean Harms, and their union was blessed with four children, Jacob, Julie, Jeannie, and Janet. He worked at Keith County Implement and the Grant Coop Filling Station before taking a job managing the office at the Grant Coop Elevator. In 2012, Larry became the Veteran Service Officer in Perkins County, which was a job that was especially fulfilling to him.

Larry enjoyed spending time in the garden, and took pride in what he grew, especially his flowers and watermelon. He was also an avid NASCAR fan. Some of Larry’s most cherished moments were spent sharing his hobbies with his family. From shooting guns, getting in an early morning round of golf with his children, or his daily evening phone calls with his daughters, time stood still for Larry when he could share these moments with the ones he loved most.

Larry’s life was built squarely upon faith in Jesus and a deep love for his family. He was slow to anger, rich in kindness, loving, and forgiving; his roots were planted firmly in the word of God.

Larry was a hard worker and placed a high value on integrity and doing things the right way. Larry was measured and soft-spoken yet steadfast in his convictions.

He had a great love for his country and was so gratified by the opportunity to serve the veterans of Perkins county and even some that sought him out from other communities. As a husband and father, Larry modeled the kind of steadfast love that wasn’t preconditioned; this was just another way that he tried to live out and share the Gospel. Larry finished his race, kept the faith, and is no doubt experiencing the light and love of the eternal shepherd, whose voice has been a familiar one throughout his life journey.

Larry was preceded in death by his parents.

Larry is lovingly survived by his wife, Norma Jean Kuskie of Grant; his children, Jacob and Julie Kuskie, both of Grant, Jeannie Kuskie of Kearney, and Janet Kuskie of Oskaloosa, Iowa; his siblings, Charles Kuskie of Venango, Karen Romer of Bennett, Colo., Walt Kuskie of Golden, Colo., Shirley Kuskie of Grant, Jerald Kuskie of Papillion, Joyce Barnett of Colorado Springs, Colo., Edwin (Saundra) Kuskie of Lemoyne; along with many nieces, nephews, other relatives, and friends.

A memorial has been established in Larry’s memory for later designation. Condolences may be shared at bullocklongfuneralhome.com, where the services will be streamed live for those unable to attend.

Services will be held on Tuesday, December 31, 2019, at 10:30 a.m. at the Zion Lutheran Church in Grant with Pastor Ronald Krause officiating. Burial with military honors will be in the Grant Fairview Cemetery.