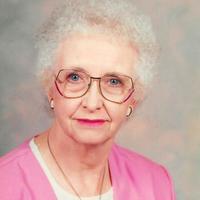 Loreen Rogers Harshman was born November 2, 1926 at Elsie, Nebraska to Jesse Rogers and Frieda (Smith) Rogers. She is the second of four daughters born to the couple.

Loreen attended Grade School in a one room school near her parent’s farm. She lived and work for a family in Grant, Neb. to attend four years of high school, taking home economics which, she used all her life. She also took four years of choir and band, reaching her goal of First Chair Saxophone her entire Senior year.

She learned to knit a child’s long-sleeved sweater which was given to a soldier’s child during the war. Her mother also taught Loreen to crochet so she knit and crocheted many items for her family.

She met Virgil Harshman early in 1944 and on August 28, 1944 they eloped to St. Francis Kansas and were married. Four children were born to their union; Jack Roger, Vickie Jane, Lynn Harlan, and Sheila Marie. She helped move her family from the farm into Julesburg, Colorado in 1966 where she occasionally acted as secretary for her husband’s business.

In 1990 Loreen sold her home and moved into an apartment until she moved to Wray, Colo. in 1993 to be near her daughter Vickie and her husband Lurie Love.

She transferred her church membership in 1995 to the Wray United Methodist Church. When active she was chairman to the Evangelism Committee, as at one time, a member of United Methodist Women and sang in the choir. She also enjoyed visiting the elderly, joining the Hospital Auxiliary, being an artist and painting and especially loved sewing; making many items for friends, family and even great grandchildren.

In 2004 Loreen suffered a mild stroke but recovered quickly. She appreciated her family taking care of her, especially the Love family. A second stroke moved Loreen to Hill Crest Care Center for full time care until her passing.

She is survived by her son, Jack and wife, Sherry Harshman of Denver, Colo., daughter, Vickie Love and husband, Lurie of Wray, Colo., and daughter, Sheila Hageman of Fremont, Neb.

Schmidt-Jones Funeral Home is in charge of arrangements.