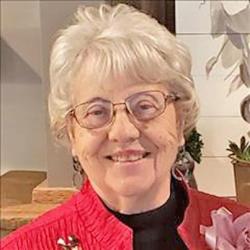 Marilyn was born June 10, 1936, in Paxton to Robert and Leota (Spurgin) Johnson and grew up on the family farm north of Elsie. She graduated from Elsie High School in 1954. She began college at Kearney State College in 1955 but her uncle was the school board president and asked her to start teaching in the elementary school in Paxton in 1956. Marilyn taught in Elsie and then Wheatland School District until her retirement. She did go back to Kearney State College in the summers to receive her bachelor’s degree in 1971 and one of her proudest moments was receiving her college degree with all four of her daughters in attendance.

On September 19, 1958, Marilyn married Rex Holscher from Imperial. Marilyn was teaching in Kimball by then and Rex was working for Dudden Implement in Grant. They made their home in Grant and Marilyn lived in Grant until she moved to Lincoln in 2016 to be closer to her girls.  The union would be blessed with four girls: Michelle (Shelly), Sheri, Sharon (Renee), and Sharlene.

After she married Rex, Marilyn began teaching elementary school in Elsie for Wheatland School District. Marilyn was devoted to her students and to being the best teacher possible. She was famous for her decorated bulletin boards which changed for every holiday and season. Marilyn made special gifts for her students each Christmas and made sure the hundreds of kids she taught worked to their potential. Mrs. Holscher was known for her firm and fair classrooms.

But she was the biggest fan to her four girls. Marilyn along with Rex never missed an event if she could help it, whether it was a sporting event, 4-H, Girl Scouts, drama or music. With four girls, there were times that she sat through a freshman, junior varsity and varsity event all in one night. Fair time was always quite an adventure in the Holscher household whether it was baking, sewing, demonstrations or other project that needed completed for exhibit. Marilyn was a devoted Grammy for her two granddaughters too. She attended their events, did craft projects with them, took them on trips and read to them whenever they would sit still.

Marilyn was active in her community wearing multiple hats. She was an active member of the Grant Methodist Church serving in different capacities, including all officer levels of the United Methodist Women locally and within the district area. She was a committee member, reader, usher, greeter and oversaw the book project to raise funds for Epworth Village supported by the Methodist church. She was a member of the teacher sorority for the area and attended outings faithfully. Marilyn enjoyed the Red Hatters Club outings in the region as well. And of course, she continued to promote education of our youth by being a volunteer reader at Grant Elementary after retirement.

In lieu of flowers, the family has requested memorials to be designated for the Alzheimer’s Association and the Grant United Methodist Women.

Cards may be sent to Sheri Holscher, 7820 Hacienda Drive, Lincoln, NE 68516. Condolences may be shared at bullocklongfuneralhome.com, where the services will be streamed live for those unable to attend.

Services will be held on Saturday, January 18, at 1 p.m. at the Grant United Methodist Church with Pastor Lorri Kentner officiating.

Burial will be at the Grant Fairview Cemetery. There will be no visitation prior to service.