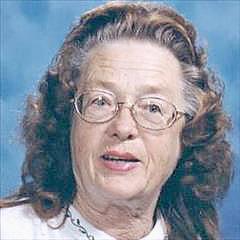 She was born February 17, 1931, to Harvey and Bea Gartrell at Maywood Nebraska.

They farmed south of Madrid for many years and retired to town life in 1972. Verla was an avid gardener, and her home and yard was always full of an array of plants and flowers, especially around her pond in her yard in Madrid.

She collected and treasured many years of newspaper clippings and photos of her children, grandchildren, and extended family.

Always a hard worker and saver, she worked into her late 80’s, the most recent at the Little Kitchen Diner with Cheri Brott, who became a treasured friend.

She was preceded in death by her loving husband Clayton in 2006, her parents Harvey and Bea Gartrell, a brother Dale in 1957, and a son, David Terry, in 1998.

A memorial has been established in Verla’s name for later designation. Condolences may be shared at bullocklongfuneralhome.com.

Cremation was chosen, a Celebration of Life was held Sunday, December 29, 2019, at 1:30 pm at Bullock-Long Funeral Home of Grant with John Long officiating. Interment of cremains will be at a later date.

Bullock-Long Funeral Home in Grant is in charge of arrangements.