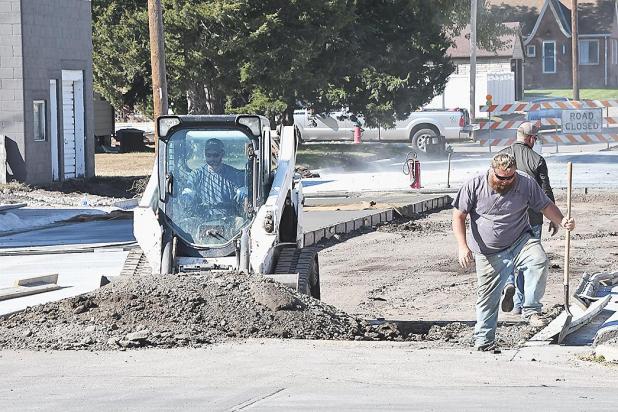 Workers with CSC Construction make final preparations for one of the final pours on 5th Street.

Call it perfect timing. As temperatures fall at night and every day means another day closer to the first snow, the City of Grant’s $250,000 street project is all but done so weather is no longer a threat.

The project included two phases—the first called for replacing two blocks with concrete; the second to replace some asphalt on portions of Hancock and 6th Streets in east Grant, along with significant asphalt patching throughout town.

CSC Construction of Grant won the bid for the project and brought in Shelco Paving of Paxton to do the asphalt work.

The project began in early September with the removal of the 4th Street between Mitchem and Hall in the southwest part of town. New concrete paving was poured there.

The second street to be torn out and replaced with concrete was 5th Street between Lincoln and Central, which is between the FVC station and Kwik Stop.

That pour was near completion early this week, with a small strip remaining were a gas pipe had to be relocated.

Shelco Paving began preparing for patch work and started patching on Oct. 15. In addition to the paving completed on Hancock and 6th Street, the city opted to have Shelco replace half of the length of the alley paving east of Pinnacle Bank.

Utility Superintendent Gary Beckler said that portion had gotten really bad and replacing the asphalt was the best option to repair it.

Good to be working in Grant

Shelco Paving owner Sheldon Giesbrecht of Elsie said it really felt good to be working in the Grant community. He noted it’s been a tough summer for the entire Giesbrecht family after the tragic death of his brother, Clayton. He died after being hit head-on by a semi truck west of Imperial on July 1.

He praised the people of Perkins County for all the support they have shown to his and Clayton’s families after the accident.

Clayton was actively involved in the constuction company and Sheldon said Clayton’s sons, Clay and Austin, have done well after taking over.