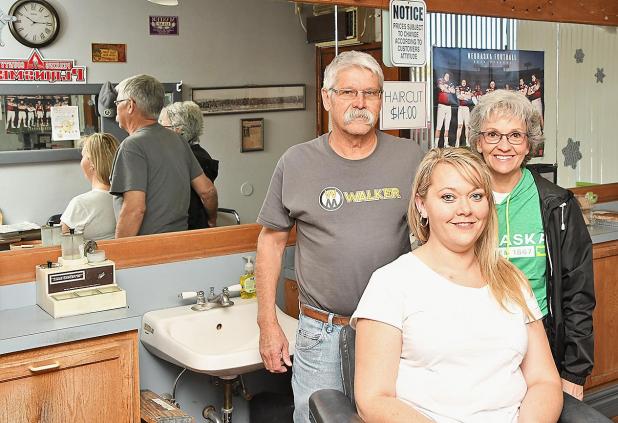 After 43 years, the Barber Pole in downtown Grant, owned by Doug and Sharon Tatum, is under new ownership as of last week.

The Tatums, who have owned the well-known local barber shop since 1976, sold the shop to Michelle Cummings of Grainton

The Tatums married and joined the barber and beautician professions 45 years ago, in what Sharon recalled as a “big year” for them.

“He got out of barber college, I got out of beauty school,” she said. “We got married, we started in North Platte and two years later we came back here.”

They have been operating a barber shop together ever since. Doug handles barbering up front in the shop, and Sharon operates a salon in the back.

Doug is passionate about his work and the atmosphere he provides within the shop. He makes it a point to know everybody’s name who enters the shop, and enjoys learning new things about his customers.

In fact, one of the biggest reasons he loves the job is the human interaction and conversation that comes along with the haircut.

“I loved that when I started, I still love it today,” said Doug.

On Oct. 1, they received a phone call from Cummings inquiring about purchasing the shop. They had not yet made a solid decision about their future in the business, but this phone call was their sign.

“Michelle called us, just, out of the blue,” Doug noted, remembering the event. “You gotta recognize that when that call comes, you go.”

Doug originally was concerned for the community. He did not want to pass up this opportunity and have to lock the doors when he eventually retired.

“I could see us getting to the end of our careers and just putting the key in the door, and it’s over with.” Doug said. “But main street in small towns doesn’t need that. It needs an opportunity to continue. I want to have somebody here, and that somebody showed up.”

Cummings has been involved in cosmetology for 15 years, mostly working with men’s hair. She has worked and managed Great Clips shops before, and has previously owned two salons.

She is originally from Gillette, Wyoming and moved to Nebraska nearly two years ago. She was looking to start up a salon in the area and two people in one day suggested speaking with the Tatums.

She recognized this was a rare chance, and reached out to Doug and Sharon.

They weren’t immediately sure about their plans, but in the end decided this was overall a good outcome and sold their shop. They closed a deal with Cummings within six weeks of her original call.

The Tatums were thrilled to find someone enthusiastic about being a barber, since there are not many who specifically do barber work in this area of Nebraska.

“It’s a staple in the community,” Cummings commented. “You know, it’s been here over 100 years, before the building was actually here. When the boardwalk was here, there was a barbershop.”

Cummings indicated she wants to add a beautician to serve Sharon’s customers as well.

Doug is hopeful that people will continue to come to the Barber Pole and support Cummings as she continues the shop as it was always run.

The day started for the Tatums at 6 a.m. Tuesday through Saturday for the 43 years they owned the shop. Cummings plans to continue that. The price and quality of haircuts will also remain consistent with the Tatum’s history.

“It’s really important for us to maintain our small communities to the point that we can,” Doug said. “I’ve always thought that if there ever came a time when I wasn’t going to be here, I wanted somebody here. It’s not just for us, it’s for the community.”

The Tatums’ reach is well beyond the community of Grant, however. Customers come from Imperial, Benkelman, Wallace, Elsie, Madrid, Ogallala, Hayes Center, Paxton and even Colorado to get a cut from Doug at the Barber Pole.

Since the sale of their business fell into their laps quite suddenly, the Tatums do not have firm plans for their retirement yet. Some travel may be in their future, since they have not had the time to do that in the past.

Other than that, Sharon noted that they would not be sitting watching TV and eating bonbons.

“This is lucky for us, for Michelle and for the community,” Doug said. “We appreciate this community and the surrounding communities for their support, and we want to encourage them to continue.”