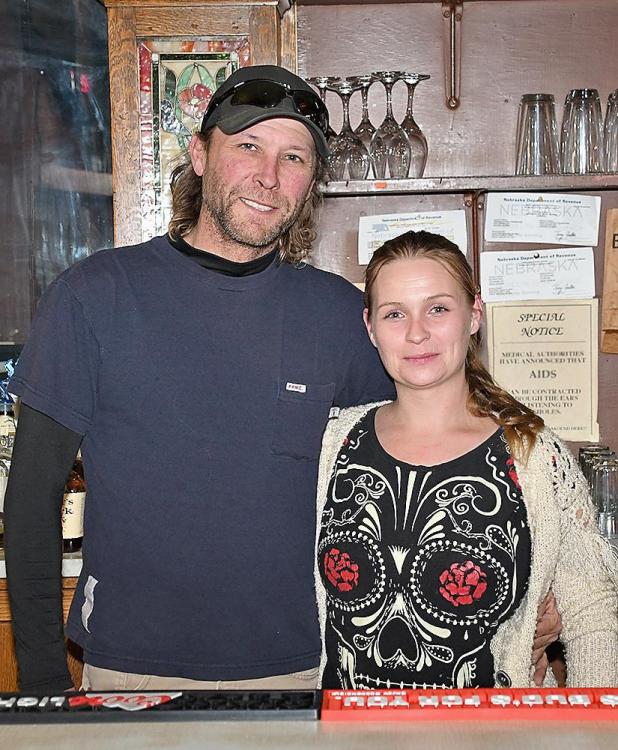 Jake Schrotberger and Angela Armstrong, the new owners of DJ’s Bar and Grill, stand proudly behind the bar of their restaurant after their first official day of business.

DJ’s Bar and Grill on Central Avenue in Grant has changed ownership after more than 26 years of being run by John and Darlene Potts.

Jake Schrotberger of Imperial and Angela Armstrong of the Grant area have been looking into purchasing the restaurant since October of 2019, and ownership was officially transferred on Saturday, Feb. 1.

DJ’s was closed on Saturday so Schrotberger and Armstrong could get everything settled and prepare for their first official day of business.

The new owners are excited about their new business venture, and John and Darlene are left with mixed feelings.

“We’re happy we get to retire,” said Darlene. “But we’re also sad that we’re leaving the business behind.”

The duo made the decision to purchase DJ’s to keep the legacy going while the Potts entire retirement.

Darlene said their plans for the future are to stick around Grant and watch their grandchildren grow, as well as do some traveling they’ve never had the chance to do.

The restaurant will keep its name, according to the new owners, because it’s important to keep the spirit of the business alive.

“You just don’t let a legacy like that die,” said Schrotberger.

Armstrong also noted that there are great friends and good food that come along with the business, which she would know well after having been employed at the bar and grill for 15 years.

The Potts family hopes the new owners can continue the business as they had done for over 26 years, and that is exactly Armstrong and Schrotberger’s plan.

“We are keeping everything the same,” Armstrong noted. “No changed right off hand, but give us a couple of years and we may change up the menu a little.”

For now, the only small change the restaurant could see is a potential addition of weekend specials on Friday and Saturday evenings once things get settled.

Their main goal for DJ’s is to keep serving the great food they’ve been serving, and keep customers who have been coming to DJ’s for years happy.

Monday, Feb. 3rd was their first day open since the ownership change, and the lunch hour went well.

“It was a nice, busy, steady lunch,” Armstrong noted. “We served a little over 30 people which is a pretty good lunch!”

They ran out of specials and nearly ran out of forks for all the customers attending the lunch rush.

Red will be returning as a night cook, and the businesses has added a new waitress and day cook for customers to meet when they come in to dine.

Overall, continuing the legacy is the most important plan for the new owners. DJ’s will remain the same restaurant the community has come to know and love.

“This community has a big heart,” Schrotberger said. “I know they’ll support us and we will do whatever we can for the community.”