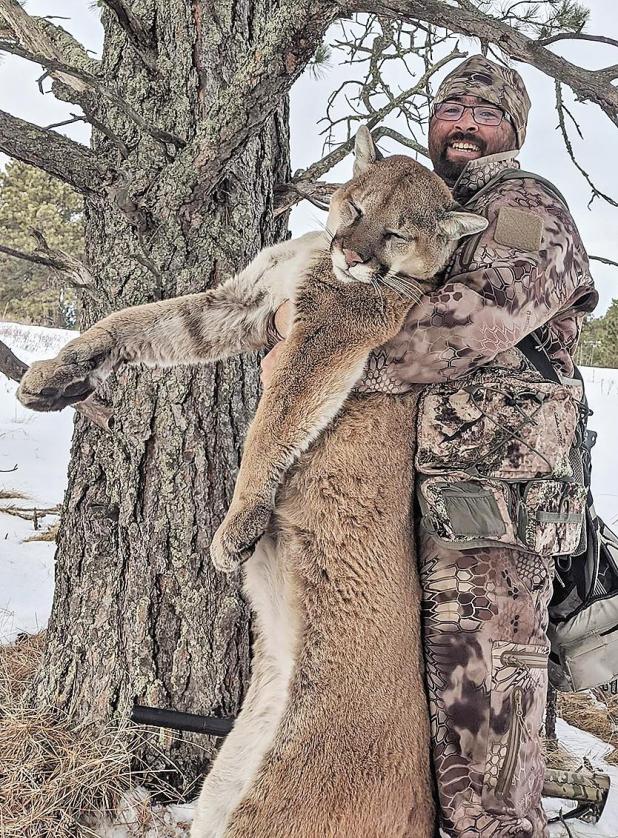 Travis Handy fulfilled a dream he’s had since he was a kids—to bag a mountain lion without using chase dogs to do it. Handy shot the trophy Jan. 2 in the Pine Ridge area.

Handy bags mountain lion in hunt of a lifetime

Eighteen inches of snow in Nebraska’s Pine Ridge stacked the odds even higher against Travis Handy bagging the trophy of a lifetime—a mountain lion.

Handy and Ben Polson, both of Grant, purchased a pair of the 400 licenses for this year’s mountain lion season available in the south unit of the Pine Ridge.

The season opened Thursday, Jan. 2 and Handy and Polson planned to stay in Chadron up to a week in search of a cat.

For years, he was preparing for last Thursday. He said he’s talked to all sorts of guys and biologists and searched the web trying to learn about the traits of the mountain lion.

Wyoming has a season and he was considering going up there until Nebraska reopened a mountain lion season two years ago.

He and his sister and dad went to the Pine Ridge last year, and while he didn’t see one, he got one to whistle back at him as dark was setting in.

“And I was like, whoa” he said. And even though he never saw the mountain lion, “I totally considered my hunt 100% successful.”

He said he and Polson began scouting areas in the national forest with Google maps, topography maps and other tools to pick out the best areas to hunt. But then, the Pine Ridge got 18 inches of snow just before the season opened, closing roads and in turn, ruining all their plans,  Handy said.

They left Grant at 3 a.m. Jan. 2 for the drive to the Pine Ridge unit where their licenses were. They took off from the truck at sunrise, 7:23 a.m. to be exact, and found a place in a canyon with some rock outcroppings that looked like cat territory.

Handy said the trek to the first site took some time, trudging through the 18 inches of snow. He said they made frequent stops, both to catch their wind and to avoid getting hot and sweaty.

Sitting quietly for two to three hours after getting their gear wet with sweat is not something they wanted to do. Plus, those kinds of conditions can cause other problems for the body, Handy noted.

However, after only sitting about an hour, Handy decided he wanted to trek up the side of the canyon to the top, for a better view.

“We’re huffing and puffing standing on top of this hill. And we’re up there for like three minutes and Ben looks over and here’s this mountain lion laying next to a pine tree 50 yards from us the entire time,” Handy said.

Within seconds, Handy began evaluating if he could even take the shot, according to the hunting regulations.

If there is another cat nearby? Can’t shoot it—it could be part of a family.

Does it have spots? Can’t shoot it—it’s still considered a kitten, and is too young to shoot.

Handy’s hunting and shooting instincts took over. After he determined he could take the shot, he crouched down with his Remington R-25, a competition rifle he has shot many rounds through.

The cat was curled up, like it had been basking in the sun, and Handy could only find an area about the size of a quarter to get a clean kill shot. But he couldn’t take it crouching down.

He pulled the bipod legs on his rifle down, laid down in the snow and took the shot.

From seeing the cat to taking the shot, Handy said it couldn’t have been anymore than 20 seconds.

Regulations require that as soon as the cat goes down, the hunter must call Game & Parks to confirm the kill. Biologists are then summoned to take blood samples, measurements and gather other pertinent info.

Handy said the mountain lion was a three-year-old  male that had never been captured so it could be collared and tagged by biologists.

The biologists wanted to take the blood samples while the animal is still warm. But Handy told them he didn’t know if he could get it back down to the truck in time.

Polson had headed the 1.28 miles back to the truck to get a sled to get the cat out.

He was met by the biologists, game warden and other G&P personnel who took him back up the hill on ATVs equipped with tracks.

The biologists did all their work at the site and helped get the animal back to the truck.

Handy said he took extra care cleaning the animal because he wants to get it mounted. He got advice from Scott Lambley, owner of Monarch Custom Taxidermy in Benkelman, on how best to clean the animal and preserve the meat.

Even though the outside temperature was already cold, Handy said they stuffed the body cavity full of snow to keep the meat from spoiling on the trip home that night.

The next day, they headed to Benkelman where Lambley measured and skinned the animal to prepare for a life-size, full body mount.

Handy and Polson returned to Grant where they boned out all of the meat. They even taste-tested some that night, Handy said. It tastes like pork, he added.

After a story appeared in the Lincoln Journal Star about the hunt, Handy got praised by some and castigated by others.

Handy said what most people don’t know is that the Game & Parks opens a season to control population and manage the resource. It’s good stewardship, he added.

When the population gets to be more than the Pine Ridge area can support, it’s logical to have a season to keep population manageable.

Handy said the season has strict regulations. In addition to those aforementioned, only a certain number of mountain lions can be harvested.

No more than four can be taken in each of the two units and if the first two in the unit are females, the season closes in that unit immediately.

Once four cats are taken, the season ends.

Hunters are required to call in before each hunt to see whether the season is still open.

Last year, he planned to hunt more but the season closed before he could go again.

Polson still has a tag so they plan to head back up to the Pine Ridge unit in hopes of getting a cat for him too.

Handy said his wife, their kids and his entire family have shared in his excitement of achieving a life-long dream.

While his wife, Bellamy doesn’t hunt, Handy said she is fully supportive of his shooting and hunting aspirations.