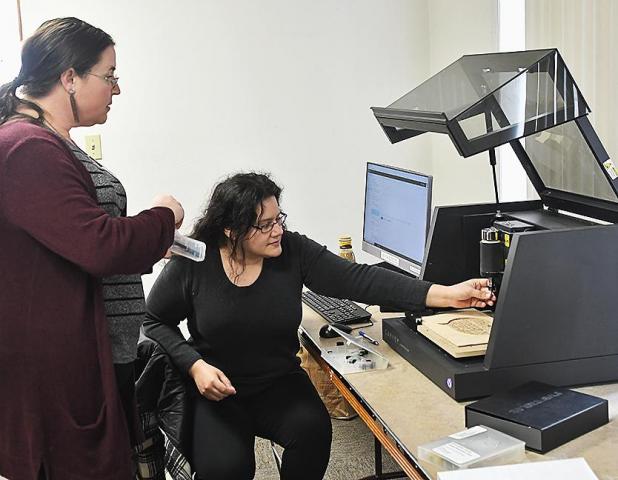 Library director Robin Quinn learns to use the CNC router.

Hastings Memorial Library recently received a grant that would bring new technology to the library for the public to use.

They were one of 31 libraries selected to receive this grant so far, and eight or nine more libraries will be added to the program in Feb. next year.

On Nov. 19 and 20, library staff began training on the new equipment. This way staff are not only able to use the machines themselves, but are able to train others once the equipment become available for public use.

According to the Nebraska Library Commission, the goal of the project is to strengthen the maker culture in rural areas in order to stimulate creativity, innovation, and the exchange of ideas.

They hope each of these factors will help facilitate entrepreneurship, skill development, and economic development within the community.

Hastings Memorial Library will house the equipment until April 6. The machines will be open to the public for use beginning in December.

Library director Robin Quinn hopes that at the end of the program they might be able to purchase some of the equipment to make it permanently available to the community.

At the end of the project, the library will host a showcase where people who came in to use the equipment will be able to display what they created.

The project is funded through a National Leadership Grant awarded by the Institute of Museum and Library Services (ILMS grant #LG-95-17-0046-17).