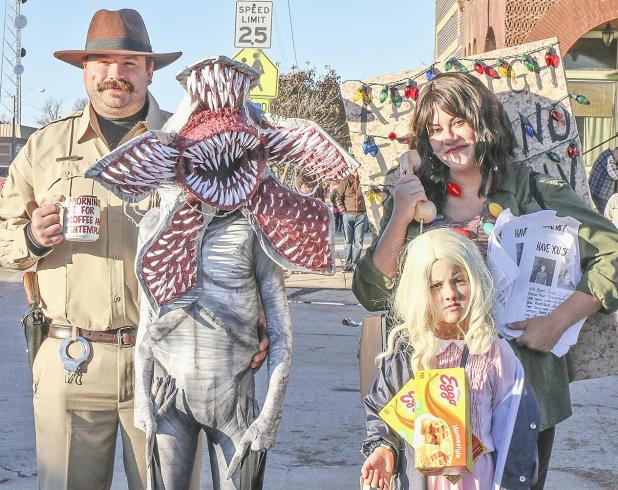 Kris and Stephanie Larson have become known for their themed Halloween costumes over the years. This year’s theme was from the TV show “Stranger Things.” They are shown with their children Braydon and Lilah.

Larsons known for their costumes

The fictional dimension of Upside Down paid a visit to Grant this Halloween, courtesy of Stephanie and Kris Larson’s enthusiastic costume creations.

The Larson family loves to go all out and wow the town on Halloween. Their stunning outfits are homemade by Stephanie and Kris each year, and their children delight in perusing the town dresssed as their favorite characters.

This year, the Larsons took inspiration from the popular TV show “Stranger Things.” Chief Hopper, Eleven with her favorite snack of Kellogg’s Eggos and even Joyce’s homemade ouija board were among the bunch.

Perhaps the most impressive and frightening of the costumes was the Demogorgon monster.

Stephanie put the group’s costumes together in about two weeks, but the Demogorgon required the most time and effort.

The monster was created from craft foam, masking tape, and approximately 300 acrylic nails to make the creature’s teeth.

This year was the first the Larsons have entered a costume contest, and unsurprisingly they walked away with $100, which Stephanie claims was almost immediately spent at North Platte’s movie theater concessions stand.

The Larson family has done group costumes for seven years, and they have covered a wide range of themes.

The year their theme was “Guardians of the Galaxy,” Stephanie and Kris created a Groot costume for their son consisting mainly of plumbing foam. Star-Lord, Gamora, and a wildly lifelike Rocket Raccoon also went trick-or-treating together in 2017.

Other group costumes the Larsons have tackled together are Super Mario, Beetlejuice, Jurassic Park, Despicable Me and Wreck-It Ralph.