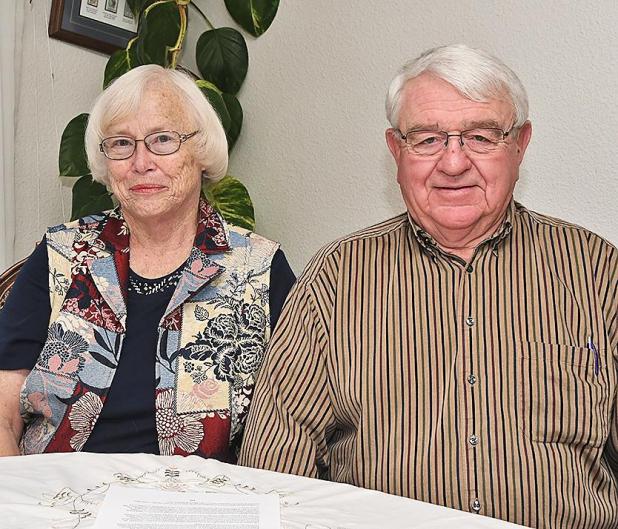 Keith and Doris Olsen have been selected as one of the 2020 recipients of the Distinguished NEBRASKAlanders award.

Lifelong Perkins County farmer Keith Olsen and his wife, Doris, of Grant will be recognized as one of three recipients of the 2020 Distinguished NEBRSKAlander honor from the NEBRASKAland Foundation.

The award will presented at the 2020 Statehood Day banquet in the State Capitol Rotunda Saturday, Feb. 29, 2020. The honor recognizes Nebraskans who have distinguished themselves and the state.

An immigrant from Denmark at the age of 3, Olsen’s grandad, Martin, first came to Perkins County in 1917 and purchased three quarters of land between Brandon and Venango. He moved his family out from Nebraska City in 1923.

Olsen’s parents, Anders and Jeanette, took over the farm and after graduating from the University of Nebraska in 1967, Keith joined the opertion.

In September, 1968 Olsen went to India through the International Farm Youth Exchange program, returning in March, 1968.

Olsen credits that experience as the foundation for things to follow throughout his career. He said the contacts and friends he made opened up many opporutnities over the years.

He and Doris married in November, 1969, just months after his father died suddenly of a heart attack at the age of 63.

Two years later, they moved to the home place.

In addition to running the farm and raising a family, Olsen became involved with Farm Bureau, starting out first on the county board level and then getting involved at the state level as a member of their policy development committee that wrote policy at the state and national level.

“That’s what really opened the doors for me to get involved in Farm Bureau.” he said.

Despite the drive, they came home every weekend—to the tune of about 3,000 miles a month.

While his duties are down, he said they still spend a great deal of time on the road attending a variety of events.