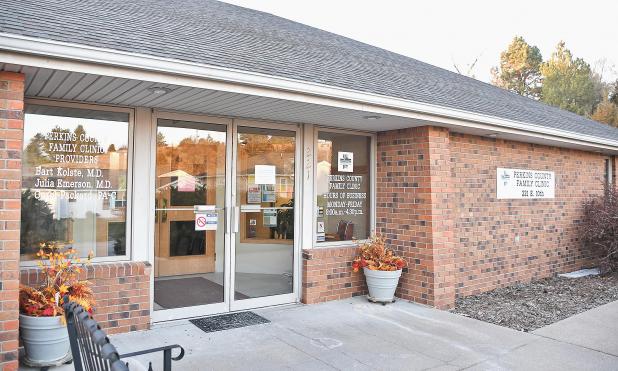 Perkins County Health Services purchased the building housing the Family Medical Center in Ogallala from Dr. Bart and Angie Kolste, effective Nov. 1. The facility will reopen on Wednesday as the Perkins County Family Clinic. Dr. Kolste and PA Carol Packard will be joined in the clinic by Dr. Julia Emerson, who has joined the PCHS staff.

PCHS CEO Neil Hilton said Dr. Kolste approached the hospital in early 2019 to see if they would be interested in the facility.

That started the ball rolling. After nearly 10 months of working through the steps necessary to establish a rural health clinic, the process is complete.

Hilton said PCHS retained the office and nursing staff personnel and have added an additional family practice doctor to the clinic.

Dr. Julia Emerson of Big Springs began working with PCHS in October and will now be based in the Ogallala Clinic.

She spent the past five years at the Sedgwick County Medical Center in Julesburg, Colorado.

She will be joined by Carol Packard, PA, who has worked with Dr. Kolste since the clinic opened 30 years ago. Hilton said Dr. Kolste will continue to see patients on a part-time basis going forward.

Hilton said they did some light construction in the building over the weekend along with installing new phone and computer systems.

The IT team at PCHS has been working for several months to get Dr. Kolste’s electronic medical records incorporated into PCHS’ system.

Members of Kolste’s staff have been in Grant several days for orientation and training on the medical records system.

Hilton said Kolste wanted to work with PCHS to give Ogallala area residents a choice in their health care.

“We serve a fairly consistent contingent of Keith County folks already,” Hilton said. A clinic location in Ogallala will provide for handy local access and convenience to those people who already use PCHS providers.

It will continue to solidify PCHS’ efforts to be a regional service provider, he noted.

“It’s in full support of Bart Kolste and Carol Packard, recognizing their commitment to serving Keith County the way they have in the past 30 years. It’s been absolutely stellar,” Hilton said.

The responsibility that PCHS feels to carry on that tradition is very genuine, he added.