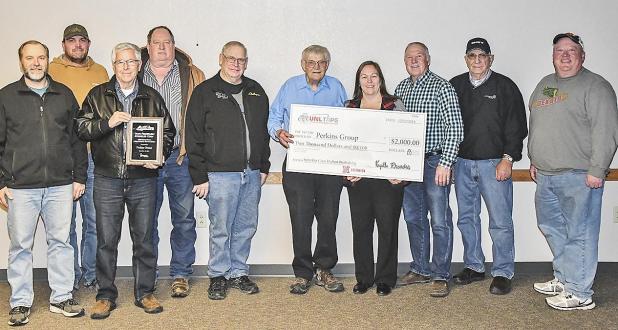 Farmers in Perkins County banded together to win the honor of the “Most Profitable Farm” in this year’s University of Nebraska-Lincoln Testing Ag Performance Solutions competition.

Their effort also netted $2,000 in prize money that was donated to the Perkins County Community Foundation Fund.

This marks the third year the TAPS program has been conducted by the University of Nebraska Research Center in North Platte. The Perkins Co. group has participated each year in the sprinkler corn competition.

Last year, the group finished as a close second and their goal was to take home the top prize this year out of the 24 teams competing.

The innovative program was  developed by University of Nebraska research and extension specialists and educators.

The goal is designed to have farmers make real-life management decisions.

The group decides the kind of hybrid they are going to use, seeding rates, insurance coverage, nutrient applications, pesticides, etc., along with other growing decisions.

From there, researchers plant the corn plots at the North Platte research center according to the group’s recommendations.

This year, the group produced a profit of $293 per acre, which was more than $30 per acre higher than their nearest competitor.

Ted Tietjen of Grant serves as the organizer and spokesman for the group. He said the real key to their win this year was marketing.

With such a large group, it would be difficult to contact each one of them to help make marketing decisions. So the group set some benchmarks for pricing their crop in advance.

When those benchmarks were hit, Tietjen pulled the trigger on marketing the corn.

In an interview after the announcement, Shawn Turner told a radio reporter that he believed quick marketing was the difference.

He said Tietjen “hit one really good top-of-the-market sale. He didn’t have long to do it.  Couple weeks. Then the markets dropped off pretty hard.”

Tietjen encourages more groups to involved in the TAPS program. He said the exchange of information between growers and researchers benefits both sides.

The research center also has a TAPS contest for grain sorghum and corn watered with subsurface drip irrigation.

Next year, the University is starting a TAPS competetion for wheat, which will be at the High Plains Ag Lab near Sidney.