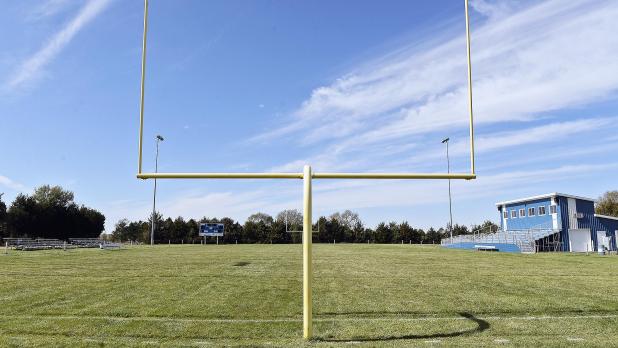 The Friday night lights in Wallace have been shut off this football season after a shortage of players for eight-man football forced them to forfeit the season.

Ryan Finley moved to Wallace in 1985, when he was in second grade, and has lived there ever since. He owns a construction company in town.

He played football, basketball, and track for Wallace High School. Football, he says, “was my passion.” He played fullback and middle linebacker, and the Wildcats went to the state football playoffs three of four years he played there.

Back then, Wallace had two small sets of bleachers on each side of its football field, but many fans parked their cars and trucks around the edge of the field and watched the games from their vehicles. Whenever the home team scored, they all blew their horns.

“That was a sound I would never forget,” he said.

But the chorus of horns and the cheer of the hometown crowd are not being heard this year as Wallace experiences something Finley never thought possible: A fall without football on Friday nights.

Wallace cancelled its varsity football season for the first time ever this year because too few kids came out for the team. It had to forfeit its last five games last year because of a lack of players. Wallace has long played eight-man football, but it couldn’t draw enough players even for that.

“I never imagined it wouldn’t be there,” Finley said. “There’s definitely a void.”

The social life in small villages like Wallace revolves around the schools and nothing draws people together more than high school football on a Friday night.

Wallace in past years typically drew about 250 people to home football games, about two-thirds the number of people who live there. On homecoming, when many alumni would return, the crowd would be twice as large.

A few years ago, Wallace erected new aluminum bleachers on both sides of the field that can hold more people than the old ones. That took away perhaps 30 parking spaces around the field, so more people sit in the stands than once did.

But even after the change occurred there were dozens of vehicles parked around the field for many games. Finley said some fans parked their vehicles there on Thursday night before a game to reserve a prime spot. Or parents would have their kids park a car at the field on Friday morning when they went to school.

“We love our football,” said Finley, who is president of the Wallace booster club.

Wallace football teams have been successful, though they have never gone to a state championship game. Still, the Wildcats have advanced to the state playoffs about half the time since 1978. It made the playoffs as recently as 2017.

The 2013 team had 17 players and, perhaps attracted by that success, 23 boys played for the team the following year, according to the MaxPreps website. But the numbers have declined since then.

In 2016, Wallace had 16 players. Last season, the Wildcats started the season with 14 players, according to MaxPreps.

But Wallace lost its first three games by lopsided scores and several players suffered season-ending injuries. Eventually, the number of healthy players dwindled to eight, too few to field even an eight-man team safely.

When practice started this year only six kids came out for the team. The school had no choice but to cancel the season.

Homecoming was held this year in conjunction with a volleyball match, but it drew a fraction of the crowd that would attend a homecoming football game. It wasn’t the same.

“It’s sad,” said Wallace principal Joel Ferguson, who played football growing up. “I have so many great memories of playing sports.”

What concerned Finley most when the season was cancelled is that young men like his son, Tanner, a junior, would not be able to play football again.