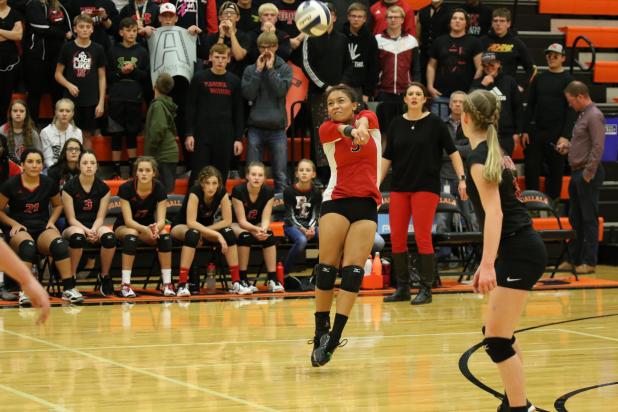 Juels Lyon bumps the ball during the subdistrict finals 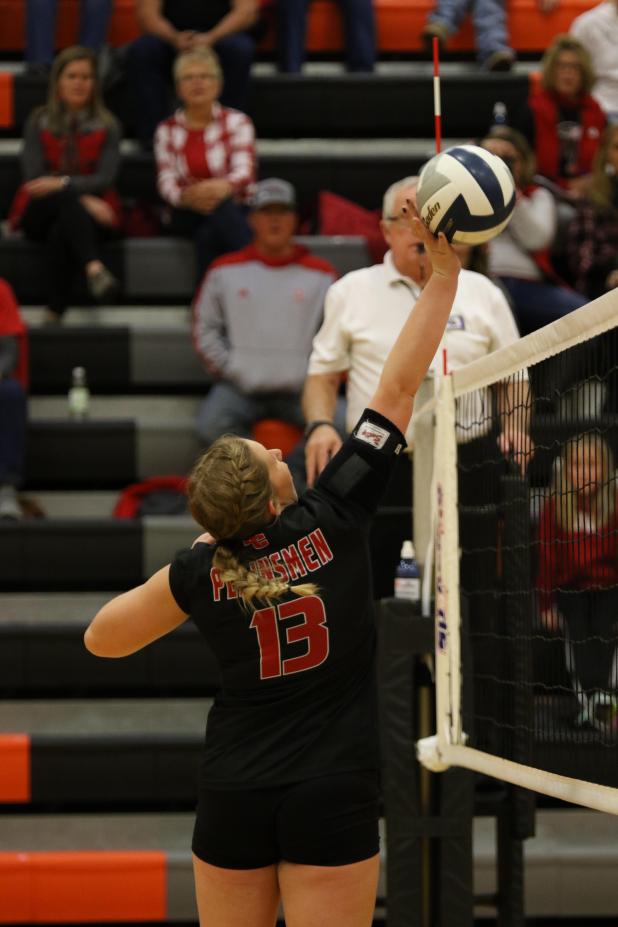 Bella Fraizer goes for the block for Perkins County

The Perkins County volleyball team ended their season in the subdistrict finals when they fell to Sutherland Oct. 29 at Ogallala.

The Lady Plainsmen defeated top-seeded South Platte in their first game of D1-12 subdistricts. The following day they squared off against Sutherland and lost 3-0.

Coach Monica Cole said she was very proud of how the girls played this season, especially in the last two weeks.

“That was the first time in a lot of seasons that we made it past the first round of subs,” Cole remarked.

There they were defeated by Pleasonton for the state tournament berth.

“So many people complimented and wondered where this team came from,” said Cole. “That feels good, knowing that our team was the underdog and we succeeded and proved ourselves with hard work, team chemistry and grit.”

In the match against Sutherland, Bella Fraizer led in kills with six.

Juels Lyon had the most aces, digs and serves received, with two, nine, and 13 respectively.

The girls finished their season 4-24, with the majority of their victories toward the end of the season.

Paxton was their first win on Sept. 19 where they won 2-0. The Lady Plainsmen then defeated Kimball in two separate matches, on Oct. 19 and Oct. 22, with final results of 2-1 and 3-0 respectively.

Their final win for the season came against South Platte at subdistricts on Oct. 28.

Samantha Patrick led individual aces for the season with 39, and the team together totaled 161.

All together, the Lady Plainsmen had 815 digs through the year, and Meghan Bishop led with 146. Patrick was close behind Bishop with 143 digs.

Rylee Huff contributed the most assists for the team with 428, and as a whole the girls had 483 assists.

Bishop and Patrick also led the team in serves received.

“We thank the community for sticking beside us throughout the season with their support and belief in us and are so grateful that we had the crowd that we had for both SPVA and subdistricts,” said Cole.