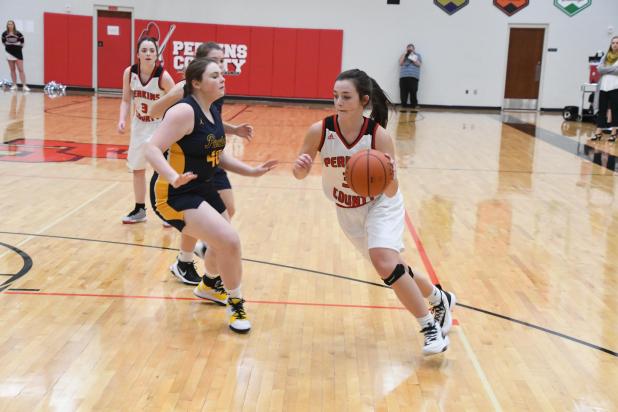 Sophomore Hallie Fisher maneuvers around Paxton Tigers for a better shot at the hoop.

The Lady Plainsmen earned their first win of the season last week against Paxton 39-37. They fell, however, to both Garden County and Dundy County Stratton.

The girls gained a quick lead on Paxton’s Tigers, putting seven points on the scoreboard before Paxton was able to score a basket.

Perkins County was able to rebound and steal the ball away from their opponents through the first quarter taking a 17-7 lead.

The team continued their strong play into the second quarter, adding another 11 points to their score by half. The Tigers added two baskets, bringing the score to 28-11 at half.

Paxton pushed hard in the second half, turning the game into an exciting challenge for the Lady Plainsmen. The girls only scored four points, while the Tigers put 18 more points on the board in the third quarter, making it a much closer game at 32-27.

Though Paxton at one point in the final quarter grabbed the lead, Dani Burge was able to sink enough free throws to keep the score even.

Tensions were high as the Plainsmen held a one-point lead, 38-37, as the clock wound down. Freshman Meredith Gloy dropped one of two free throws in the closing seconds to give the Plainsmen a hard-fought 39-37 win.

The girls’ energy from the Paxton game was lacking at the beginning of the match with Garden County on Thursday.

In the first half, the Lady Plainsmen were only able to pick up eight points, while their opponents scored 24 points.

They found their rhythm in the second half, however, and began to catch up to the Eagles.

In the third quarter, Perkins County scored 10 points, one more than Garden County, to close the margin to 18-33.

The girls continued their fight against the Eagles, but were ultimately unable to close the gap. They finished the game 30-47, which gave Garden County their first victory of the year.

The Dundy County Stratton Tigers, who were 6-0 coming into the game against Perkins County, proved to be a difficult and skilled opponent.

In the first half, the Lady Plainsmen were able to keep close behind the Tigers. By half, DCS built a 20-11 lead.

The Lady Plainsmen fell behind significantly in the third quarter, however. Perkins County scored nine points, while DCS put a whopping 21 points on the board, to trail 41-20

Scoring was limited in the fourth, making the final score 45-25.

After a week of tough games, the Lady Plainsmen’s record is 1-6.

The Perkins County Holiday Tourney will be on Dec. 27 and 28.

Three other schools will be in attendance: Maywood-Hayes Center, Creek Valley and Wallace.

The Lady Plainsmen kick off the tourney at 2 p.m. MT against Creek Valley. Wallace and Maywood-Hayes Center will face each other at 3:30 p.m. MT.

Those who are defeated on Friday will compete Saturday at 2 p.m. for third place, while the winners from Friday’s games will play for first Saturday at 5 p.m.