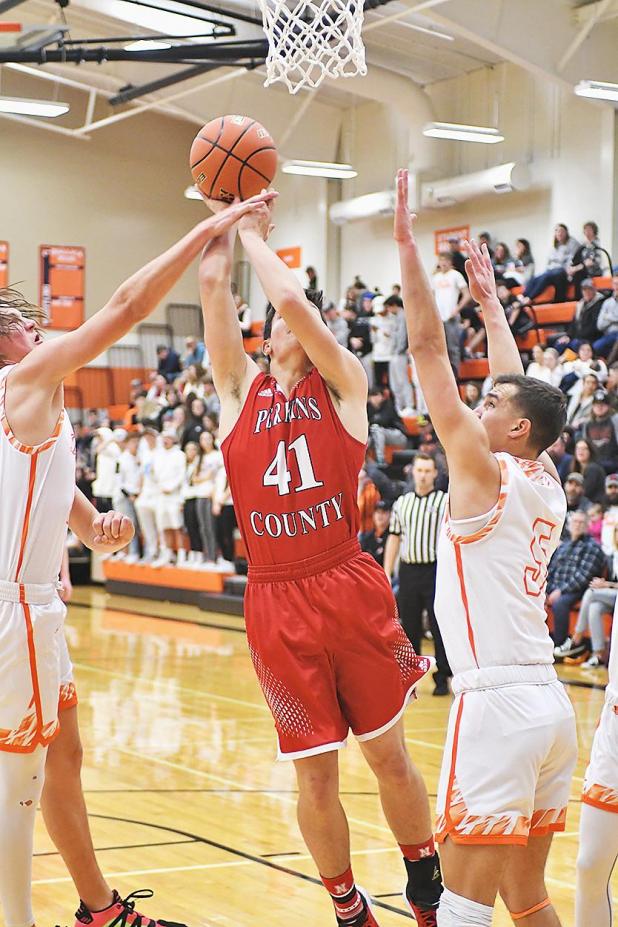 Caleb Lagler ended up making a pair of freethrows after getting fouled on this shot in the lane. Lagler finished the game with six points.

Ogallala’s depth, experience, quickness and height proved to be overwhelming when the Plainsmen faced them on the Indian’s home court Friday, Jan. 3.

Plainsmen Coach Shawn Cole said that’s one of those games where you build on what the team did well and continue to work on the areas that need improvement.

Ogallala puts mostly seniors on the floor, ranging from 6-0 to 6-7. Perkins County’s tallest man is 6-1. Plus, five of the top eight are underclassmen.

Instances occurred where a Plainsmen had rebounding position but the Ogallala player would jump higher and snatch the ball out of the air.

The Plainsmen’s Hunter Garner got the first basket of the game, 30 seconds into the contest.

Between there and the end of the quarter, Garner added a free throw and another 2-pointer while the Indians put 23 points on the board. Nine points came on three 3-pointers.

The second quarter was a little better for the Plainsmen, putting 10 up on the board, including Garner and Caleb Lagler each with four, and pair from Tristan Hite.

However, Ogallala got the hot hand, with four trey balls in a row, finishing the quarter with five of them.

At halftime, the Plainsmen trailed 53-15.

In the third, Ogallala added three more 3-pointers to lead 74-19 going into the final quarter.

The Plainsmen added four in the third and five in the fourth while holding Ogallala’s bench to just two in the fourth.

When the final buzzer sounded, the score stood at 76-24.

Garner led the team with 14 points.

Nearly half of Ogallala’s points came from behind the arc.

The Plainsmen’s next three games all come at home, starting Friday when they play host to North Platte St. Pat’s with jayvee action beginning at 3:30 p.m. MT.

After holiday tournaments, St. Pat’s remained undefeated with a 9-0, including a win over Ogallala.

Cole said they should match up better height wise against the Irish than they did against Ogallala.

On Saturday, the Plainsmen will host 3-2 Sutherland with jayvee action beginning at 1 p.m. MT.

Cole said Sutherland looks a lot like his team and feels good about the Plainsmen’s opportunity going into the contest.

The final game of the three-gam stand comes Thursday, Jan. 16 when Chase County comes to town.