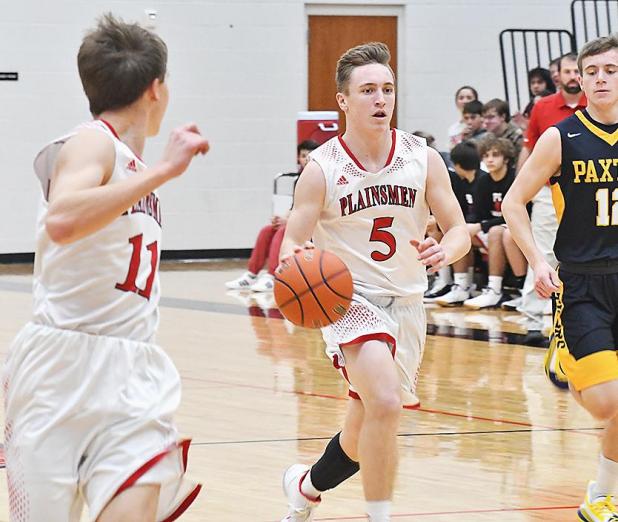 The Perkins County Plainsmen won’t go into the Christmas break with an 0-for.

It took a fourth quarter rally to get it done but they did it to earn their first win of the season.

The Plainsmen held a 2-point halftime lead and opened it up to nine at the end of the third, 47-38.

The Eagles notched  back-to-back treys to open the fourth quarter, while all the Plainsmen could muster was a free throw.

A trey ball and a free throw gave the Eagles their biggest lead in the fourth, 54-50.

After another basket by the Eagles, Triston Hite knocked down a trey from the corner to tie the game at 56s.

The two teams traded buckets again before Hunter Garner put the Plainsmen up for good with a three-pointer and a 58-61 lead.

Garden County answered a pair of free throws by James Garner to stay within three, 60-63 with :26 left.

Finally in the bonus, the Plainsmen got two more free throws each from the Garner brothers to secure the win.

Hunter Garner led the scoring with 23 while James Garner finished with 18. Hite was also in double figures with 11.

Hayden Foster scored 6, Caleb Lagler with 5, Carson Thelander with 3 and Alex Popped with 1 to round out the scoring.

Inside the arc, the Plainsmen shot 54% but most importantly were 13 for 16 at the free throw line.

The Plainsmen opened the week Dec. 17, playing host to the Paxton Tigers.

In the opening quarter, the Plainsmen couldn’t stop Paxton’s 6-11 Blake Brewster as they opened up an 18-7 lead after the first eight minutes.

The Plainsmen couldn’t get the ball to fall much of the night, allowing Paxton to cruise to a 67-40 win.

The Plainsmen were 22% outside the arc and only 24% inside.

Hunter Garner led the scoring with 15 while James Garner added 10.

Thelander, Foster and Poppe each scored four while Hite finished with 2 and Lagler 1.

The Plainsmen suffered their sixth loss Saturday when they played host to Dundy County Stratton, 65-35.

The Plainsmen stayed within two at the first quarter break, 15-17, but the DCS Tigers opened it up in the second quarter to take a 33-18 lead into the locker room.

Going into the final quarter, the Plainsmen trailed 51-24.

None of the Plainsmen finished in double figures.

The Plainsmen will resume action after Christmas with the Perkins County Booster Club Holiday Tournament that begins Friday, Dec. 27.

The Plainsmen face Creek Valley in the opening round. Wallace and Maywood/Hayes Center are on the other side of the four-team bracket.