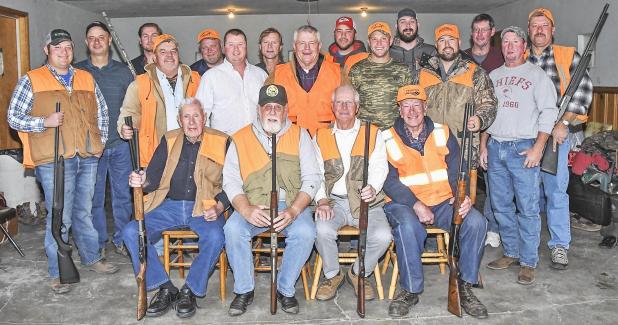 For 49 years, the “generals” of the group have been coming from Missouri to hunt pheasants in Perkins County. The four generals, seated from left, include Don George of California, Missouri, Bill Patton of Prairie Home, Missouri, Kenny Imhoff, California, Missouri, and Charles Mathews, Linn, Missouri. They are surrounded by the crew that includes friends, grandsons and five father-and-son duos. This year’s total of 19 is the largest group that has come on the trip.

The crew calls ’em “the generals.”

For 49 years straight, the generals have made the trek from Central Missouri to Perkins County to hunt pheasants.

Over the years, they’ve made lots of new friends in the county. They’ve attended weddings of friends they met here. They were even pallbearers for their Venango hosts.

They started with five but they’re down to four—Don George,  84, Kenny Imhoof, 79, both of California, Missouri; Charles Mathews, 85, of Linn, Missouri and Bill Patton, 75, of Prairie Home, Missouri.

Imhoff has made the trip 49 years straight—a fact he’s especially proud of. Goerge has only missed one year.

So just how does a relationship like this develop.

George explained his niece was at a wedding in Colorado that Dennis Watkins of Venango was in. They hit it off and Watkins eventually went down to see her in Missouri.

Watkins said he went quail hunting with the generals and he told them they needed to come to Nebraska to hunt the big birds.

Wayne and Marquerite Hoover, who lived near the Watkins, had an old house on their place. The Watkins arranged for the hunters to stay at the Hoovers in the extra house.

They did that for 19 years, becoming close friends with the Hoovers. Wayne said when he died, he wanted the generals as his pallbearers. Sure enough, they were. When Marquerite passed away, they had just gotten back home to Missouri and came right back for her funeral.

Since then, they stay on the farm where Tim and Evelyn Ourada and Dale and Vicki Ourada lived east of Venango, which is now owned by Dale
and Vicki’s children.

Over the years, the generals have added to the number of hunters who wanted to make the 650-mile jaunt to Nebraska. It’s included sons and grandsons, friends and friends of friends. The crew this year includes five father-and-son duos.

This year, there’s 19 on the trip, the most ever. With all of them staying in one house, Imhoff said it’s a little crowded but it’s only for a few days.

George keeps his little red book that charts how many birds they killed each year and who all made the trip. If there’s a bad apple in the bunch, they get uninvited, George said.

The most birds they’ve shot on a trip tallied 127 with the worst being five.

They arrive Friday, hunt Saturday through Tuesday and then head home.

Over the years, one of the highlights of the trip is their annual fish fry on Sunday night. Much of the fish comes from the Lake of the Ozarks, including crappie, walleye and catfish.

Friends they’ve met over the years are always invited, making for a full house.