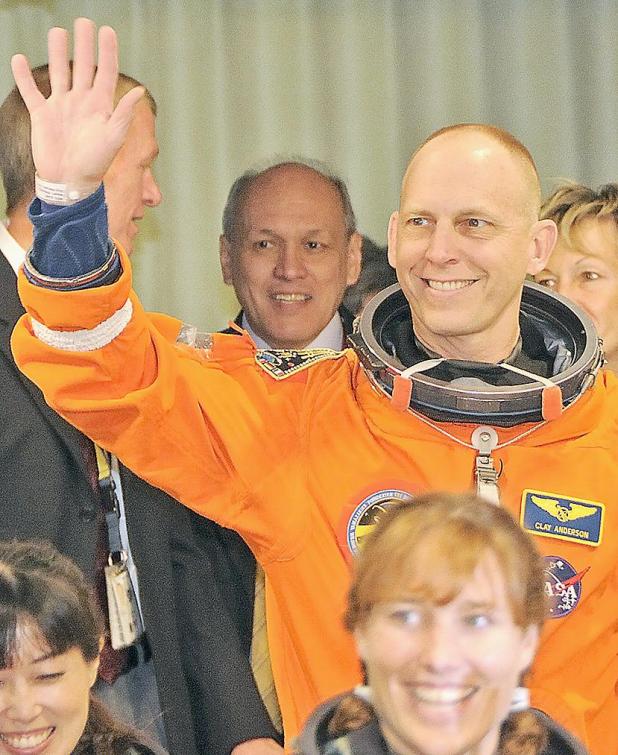 Astronaut Clayton Anderson waves to a contingent of family, friends and media just hours before his 2010 space shuttle launch.

Retired astronaut and Ashland, Nebraska native Clayton Anderson knows how to take rejection. He faced it time and time again in his quest to become a U.S. astronaut.

He first knew he wanted to become an astronaut at the age of 9. That’s when on Christmas Eve 1968, he and his family watched Apollo astronauts go behind the moon for the first time ever.

It took perseverance and determination to see his dream finally become a reality. After  14 rejection letters, he was finally selected into the astronaut training program.

Speaking to an audience made up of S.C.O.R.E. camp students, their parents and local residents, Anderson stressed everyone needs to have a dream.

Making those dreams come true takes perseverance, much like he displayed in his relentless attempts to get accepted into the astronaut training program.

One doesn’t have to be a genius, like Albert Einstein, to achieve their dreams, he noted.

Anderson said he was a good student but by no means a “genius.”

He recalled starting his pursuit of a master’s degree in aerospace engineering at Iowa State.

One of his first classes was advanced calculus with a young professor. Despite all his hard work, he got a D in the class.

He retook it again, putting in the hard work he had before. This time, he got an A.

“So have a dream, persevere. You don’t have to be a genius. And number four, be proud of who you are,” he said.

Every chance he got, he showed that Husker spirit, showing off his red N that Coach Tom Osborne had given him to fly in space.

Anderson went into space to the International Space Station twice. The first time, in 2007, he spent 152 days on the station.

In 2010, he returned to the ISS on the space shuttle, spending 15 more days in space.

People often ask him what’s it’s like to live and work in space.

He said it’s like being Superman every day. “I woke up and I flew to breakfast. After breakfast, I flew to work.

“I was faster than a speeding bullet 17,500 miles per hour five miles every single second. I was more powerful than a locomotive—I can lift anything above my head with one hand. And I was able to leap tall buildings in a single bound because there were no buildings that reached 250 miles above the earth.

“And I stood for truth and justice and the American way.”

In closing, he reminded parents, “We do have the power to change lives.”

What’s next for Anderson

Having spent 30 years at the Johnson Space Center in Houston, he said he would have liked to stay on and share that experience.

He admitted he was probably too outspoken about the program and ways to make it better. As a result, he retired from the space center.

His wife, Sue, also is a career employee at the space center, which is where they met. They continue to live in the Houston area.

Their oldest son, Cole, will be getting his master’s degree from Iowa State after completing his college football career there last season.

His daughter, Sutton, just graduated from high school and will be attending the University of Texas-Arlington next fall.

Anderson does some teaching at Iowa State and travels the country and the world speaking about his experiences as an astronaut.

Anderson said he hopes to see the U.S. land on Mars in his lifetime.

He said preparations to return to the moon will help develop and prepare the space program for necessary infrastructure for the six- to nine-month trip to Mars.

Many things must still be figured out, he noted, to keep things from going wrong.

Plus, the communication lag between Mars and earth is 20 minutes each way.

So the planning for Mars needs to be much different than just going to the moon, he added.

He said the privatization and commercialization of space flight will be interesting to watch over the coming years as well.

When asked what stands out during his career as an astronaut, he said seeing the earth from the ISS is one of the most spectacular views any person can ever experience.

And there’s only one way to do that—to be an astronaut.