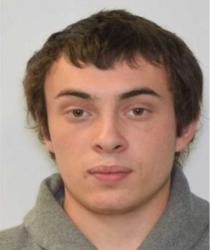 The Nebraska State Patrol (NSP), working with the Cheyenne County Sheriff’s Office and other local law enforcement, has identified the suspect involved in two high-speed pursuits earlier this week in multiple counties of western Nebraska.

NSP is requesting the public’s assistance in locating the suspect, identified as Elijah Mason Dunning, 21, of Commerce City, Colorado.

Dunning is 5’7” tall and weighs approximately 130 pounds. He has brown hair and brown eyes.

NSP initiated a traffic stop shortly after 11 p.m. on a white 2014 Dodge Ram pickup. The vehicle was discovered to be stolen. As the Trooper approached the vehicle, the suspect drove off.

The suspect then led NSP and officers from other departments on two separate high-speed pursuits through multiple counties. At the conclusion of the second pursuit, the driver fled on foot and was not located. In the vehicle, authorities found a handgun, drug paraphernalia and methamphetamine.