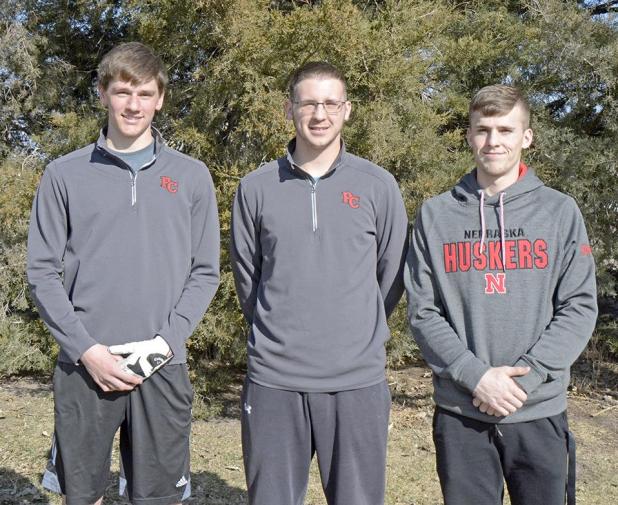 The senior boys among those heading to state next week are (l-r): Michael Beck, Tyson Patrick and Josh Johnston.

Ogallala hosted the last regular meet of the season, on May 10, where Coach Troy Kemling and his PC team and 12 other schools came to play.

Despite winds around 15-20 mph, and the team starting on the back nine, the Plainsmen were able to take fifth place, with a team score of 348. Sidney took first with 326 strokes as a team.

Kemling explained, “It was a difficult start for the team on the back nine. Most of our players incurred extra strokes from hitting the ball into the tall rough. It was easy to lose it and if you did happen to find your ball, it resulted in a chip out most of the time.”

Tyson Patrick, a senior participating in his last regular season golf invite, was the leading Plainsmen on the individual score board. Patrick took seventh place after shooting an 82, 42-41.

“Tyson responded with a solid round. Statistically he executed his short game the best on the team, going up and down half the time. A top ten finish at this large meet is a noteworthy accomplishment, Kemling said.

Senior Michael Beck tied with Carson Thelander, both finished the day with 90 strokes.

“Michael, Carson and Jacob fought inconsistent drivers today which put each golfer in trouble. They learned the need to place their drives in a position they can take advantage of. When they hit in the rough, it placed more stress on their short games to overcome the wayward shot,” Kemling said, and added “I do like the challenge playing with class B school provides us. We need to learn from (today) and work on those areas which were a struggle. Districts are Tuesday and we will need to play well in order to advance to state.”

Districts were held on Tuesday, May 15, in Kimball and the PC boys took second place as a team with a score of 342.

Full results from districts will appear in next week’s issue of the Grant Tribune Sentinel.

The Class C Plainsmen will travel to the Kearney Country Club on Tuesday, May 22 and will play in the first round of championships at 9:30 CT.